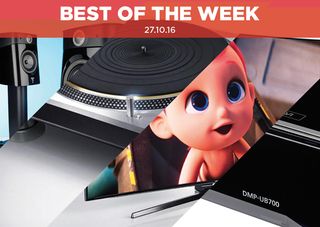 This week Samsung denied it was in talks to buy Focal, the Technics SL-1200G finally went on sale and Xbox One S is about to receive some much needed audio support in the form of a bitsream audio update.

For reviews we have Samsung's 65KS9500 4K TV, Panasonic's 'affordable' DMP-UB700 4K player and the Aego soundbar from Acoustic Energy

MORE: The best What Hi-Fi? deals of the month - November

Technics SL-1200G turntable goes on sale in UK and Europe

The Technics SL-1200G turntable has finally gone on sale in UK and Europe.

Priced at £2999 (and not £2799 as originally expected), we had a hands-on with it at CES in Las Vegas, and thought it had a "seriously accurate, clear and detailed presentation".

Samsung has had a busy month, what with its exploding phones, as well as picking up several Awards for its TVs. In the last week it's also denied it's about to buy Focal.

Purchasing Focal would give Samsung control over Naim Audio, which merged with Focal in 2011, but both Focal and Samsung have denied a deal is in the offing.

Xbox One to get bitstream audio and Dolby Atmos support

We weren't too impressed with the Xbox One S audio performance, but it's about to get a boost in the form of a bitstream audio update.

By decoding through a home cinema amp instead of onboard the Xbox One, the audio performance of Blu-ray and 4K Blu-ray films should vastly improve.

MORE: Xbox One to get bitstream audio and Dolby Atmos support

Apple has a new TV app for Apple TV, iPhone and iPad

Samsung's been almost faultless with the quality of its TV sets, and its latest curved TV is another stunner.

The KS95000 slots into Samsung's premium range of TVs and performs exactly how a premium product should. The HDR-assisted image is superb, with great quality across all sources and a solid audio performance.

Billed as being the match of the Award-winning DMP-UB900, the UB700 has a lot to live up to.

It boasts the same picture specs, but the image isn't as impressive and we'd like the sound to be more powerful. It's enjoyable (and affordable) but for a full-fat 4K experience, we suggest you get the UB900.

If you have a small room and aren't looking to splash too much cash on a soundbar, the Aego could be for you.

For £200 you get a soundbar that's small, but boasts an expansive and solid sound. Others are more skilled, but not this affordable.