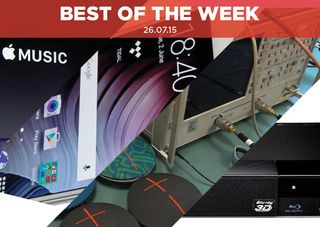 This week Apple was the target of criticism for its policy regarding payment of musicians' royalties for its upcoming Apple Music service, Onkyo and Pioneer's collaboration reaped two new AV amplifiers while film studio 20th Century Fox has jumped on board the HDR bandwagon with a number of titles to be released in the format.

It was a good week for reviews as we took a look at Samsung's super Galaxy S6 smartphone, the brilliant BDP-S4500 budget Blu-ray player from Sony and the impressive EH-LS10000 projector from Epson.

MORE: Behind the scenes at Ultimate Ears' R&D lab

Apple doesn't often change its mind, but the tech giant backtracked on its plan for royalty payments to artists on its forthcoming Apple Music service.

Initially Apple had intended to pay musicians only after the three-month free trial period had ended. This didn't go down well with pop star Taylor Swift, who outlined her stance in an open letter stating that "three months is a long time to go unpaid" for any musician.

Soon afterwards Apple responded, saying that musicians will now be paid during the free trial.

A kerfuffle over nothing or the right decision? Apple Music launches on 30th June.

Onkyo's collaboration with Pioneer has resulted in a new range of premium home cinema amps.

The Onkyo TX-RZ800 and TX-RZ900 certainly look different from the manufacturer's less expensive AV amps, but under the hood they have Dolby Atmos and DTS:X capability, 4K HDMI inputs and outputs, wi-fi, AirPlay and Bluetooth along with integration with Spotify Connect and Deezer.

They will both go on sale in August.

While the standards for HDR have not been set yet, that hasn't stopped 20th Century Fox from announcing its first batch of titles in the format.

Kingsman: The Secret Service, The Maze Runner, Exodus: Gods and Kings and Life of Pi will be getting the HDR treatment - they will be available for a beta launch in the US on Samsung's SUHD TVs.

So far there has been no word on whether or not this beta will be coming to the UK.

Samsung's recent phones have been slightly underwhelming. This year the Korean giant has responded to the lacklustre reception for the S5 and put out two flagship phones in the S6 Edge and the S6 - and they're both stunning.

Ditching the plastic aesthetic, Samsung has gone down the Apple route - and it looks terrific. It's a sealed design, however, so changing the battery and storage is a no-go.

Still, the screen is super sharp, colours are vivid, and though audio isn't quite class leading, it's an impressive effort. It's fast too, able to handle pretty much anything you throw at it.

The lack of a removable battery and storage is a disappointment, but Samsung has made up for it by delivering a blindingly good phone.

Sony has been on a roll with its budget Blu-ray players, and the recent run of good form continues with the BDP-4500.

It's missing wi-fi but otherwise it has a decent selection of features with 3D, DLNA and smart features all accounted for.

Performance-wise there's fine detail aplenty with excellent colour reproduction and the player has a talent for handling motion and contrast.

This is a great buy if you're in the market for an entry-level Blu-ray player.

Epson's EH-LS10000 offers plenty of thrills, but we can't quite shake the feeling that it doesn't quite fulfil its potential.

Despite the terrific performance this isn't a native 4K projector, only a Full HD one capable of accepting 4K material.

Otherwise the EH-LS10000 is a very capable projector with a bright and punchy picture and high levels of detail when it's dealing with Full HD picture. Its pseudo-4K performance can be very impressive, but compared with rivals it's lacking in insight.

This is a fine projector from Epson, but it's not quite the ticket if you're going down the proper 4K route.