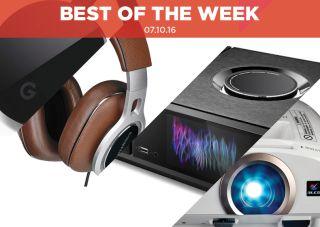 In terms of reviews, it was a strong week with noteworthy products including B&W's P9 on-ears, Epson's EH-TW5350 projector and Philips SHB8850NC noise-cancelling headphone.

MORE: The best What Hi-Fi? deals of the month

Naim has gone back to the drawing board and redesigned its entire Uniti all-in-one line-up.

Taking a few design flourishes from its Naim Mu-so, there's extensive support for streaming services, file formats and a plethora of upgrades to boot.

The range will appear at the Indulgence Show in mid-October, with a staggered release of products starting in November and ending in February 2017.

KEF has partnered with Porsche Design to create a trio of lifestyle products.

All three products are available to buy now.

MORE: KEF teams up with Porsche Design for new wireless speaker and headphones

Google launched the Chromecast Ultra, the first streamer to support both Dolby Vision and HDR.

Looking much the same as the standard Chromecast, it costs £70 and has 4K support from Netflix and YouTube, with Google also offering 4K films from its Google Play service.

Philips B8 Dolby Atmos soundbar to go on sale for £900

B&W turns 50 and is celebrating in some style with its P9 headphones.

No matter what we fed them, they were able to adjust and fire out music that's both accurate and enjoyable.

The price tag will cause some to wince, but for that you get a very talented pair of headphones.

Philips has pulled off a miracle with these headphones. They're wireless, feature noise-cancelling and offer a performance that's not to be sniffed at for the price (£90).

The sound is spacious, well-organised and surprisingly detailed. They'll keep you satisfied for many hours.

For £600 this Epson projector offers a great performance. Apart from a rather thin sound, we can't of a reason why you wouldn't want it.

From its clear, detailed picture to its impressive contrast and well balanced colours, the Epson puts in an engrossing performance. Those looking for a quality projector on a budget, look no further.