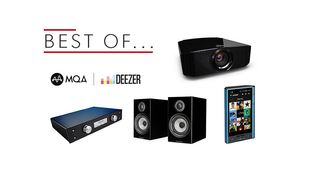 This week B&W announced the launch of its 700 Series of loudspeakers, MQA formed an alliance with music streaming service Deezer and JVC celebrated the 20th anniversary of its D-ILA chip with three new 4K projectors as well as a limited edition projector.

Bowers and Wilkins revealed its new speaker range, the 700 Series, which incorporates technology from the pricier 800 Series.

For details on the technology and prices, follow the link below. They're available now and you can read our exclusive review of the 707 S2 speaker right here.

There's more good news for promoters of Master Quality Authenticated (MQA), as the music streaming service Deezer has signed up to support the technology.

It continues a run of positive news for MQA, with Sony's two new Walkmans supporting it, as well as LG's V30 smartphone.

There's no word on when MQA-supported tracks will be available, but we can't imagine it's too far away.

The DLA-X9900 and DLA-X7900 are THX 3D-certified and all three come with HDCP2.2 certification. All three are due to be launched in October.

Meanwhile, JVC is releasing a special 20th anniversary limited version of its DLA-20LTD in bright red.

Ultra HD Premium: What are the specs? Which TVs support it?

Philips 2017 TVs - everything you need to know

Behind the scenes with Bang & Olufsen and the new Audi A8

What is 4K Ultra HD TV? Everything you need to know

With great authority and plenty of power in the bass performance, the 707s are able to do things compact speakers shouldn't.

They aren't without a few compromises – a lack of dynamic subtlety and rhythmic dexterity among them. But they remain an admirable pair of speakers.

The Kann is a big and chunky music player. It's also excellent.

Looks aside, the Kann delivers a strong, dynamic presentation, with great detail and punchy bass.

The design may be an awkward fit for your pocket, but the sound is what counts and that is impressive.

If you're looking for a luxury amp, the Lavardin isn't it. If you're after for a great one, look no further.

Boasting a fast, fluid and dynamic sound, it's delivery is impressively detailed and the presentation is particularly musical.

It's one of the most entertaining amplifiers we've heard in years.