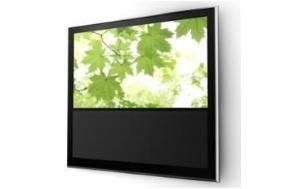 Just 6.4cm thick, and with the wall bracket adding just 4mm, it's one of the slimmest flatscreen models you can buy, and still has high quality stereo speakers, plus an active bass system, built-in.

The most obvious feature of the TV is that while widescreen, it's actually almost square, the section below the display being taken up with an active speaker system.

There are two-way arrays for left and right channels, using a 19mm tweeter and 5cm midrange, and a separate 10cm woofer in a 1.8l enclosure, with adaptive bass linearisation.

The speakers are behind a cloth grille, with a variety of optional finishes available, and the TV itself can also be used on a floor-stand if you don't want to take full advantage of its picture-like looks, complete with anodised aluminium frame. The port for the reflex-loading enclosure is to the rear of the set.

Or, if you do wall-mount it, it can be left or right hinged, allowing it to be swung into the optimal viewing position, then folded back when not in use.

The display itself is a 200/240Hz Full HD LED edge-lit LCD, while the TV has DVB-T tuning built-in and the option of DVB-C, and two HDMI inputs among a range of connections including the option of a DVB-HD module.

Complete with Bang & Olufsen system remote control and wall-bracket, it's expected to retail for somewhere a bit over £6000.