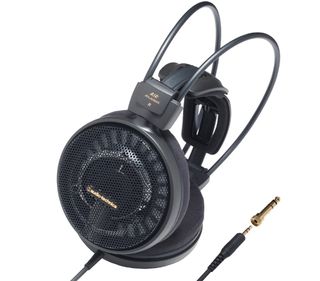 Audio-Technica has announced a slew of new headphones in its Active, Elite, Street and Classic ranges.

Claiming up to 90% noise cancellation, the ANC33iS also feature a volume control with an inline mic for answering calls and controlling music from smartphone devices, iPhones, iPads and iPods.

The over-ear ATH-WS99 headphones (£250, Spring 2013) have, according to Audio-Technica, been developed to deliver extended bass output.

The 53mm drivers claim to produce a smooth midrange and clear high frequency, with acoustically sealed ear pads diminishing sound leakage. Like the ATH ANC33iS they come with volume control and an inline mic.

Audio-Technica is also launching its first fitness-orientated headphones. The ATH-CKP500 (£40) and the ATH-CKP200 (£30, pictured above) both feature ergonomic ear pieces and adjustable positioning and come in black, red and blue colours.

The Elite range sees revisions across the line with its premium ‘X’ versions encompassing new drivers, lighter weights and new designs. Look out for the ATH-AD1000x (£570) and ATAD2000x (£975) models.

Also revised are the ATH-AD900x headphones (£315, pictured above), with new drivers and Audio Technica’s copper-clad-aluminium-wire technology (CCAW). All new models in the Elite range will be available from Spring 2013 onwards.

Lastly, the Audio-Technica Classic range sees improvements to its ATH-AD500x (£150) and ATH-AD700x (£195) open-backed headphones, with new 53mm drivers and the inclusion of the CCAW technology. Both will be in available in Spring 2013.

Look out for reviews of some of these new Audio-Technica headphones over the next few months.