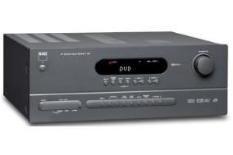 Delivers a big, vibrant sound, but the specification is dated, and newer rivals outgun it now

Out of the box, the NAD doesn't have the same striking style as some of price rivals, but there's still a certain level of attraction to its distinctive looks. None of us is enamoured by the lack of auto set-up, however, even if the menus are easy enough to navigate manually.

In terms of specification, the T754 is a little underwhelming at this price. As we mentioned, there's no automatic calibration, nor is there any HDMI-switching. Also, there's only support for six surround channels of sound, so it's not suitable if you plan to have two extra rear speakers.

On the other hand, there are outputs for two subwoofers. You also benefit from two-to-one component switching, plus the standard selection of AV connections, and support for Dolby Digital and DTS decoding. And sonically, there's much to admire: much like Lewis Hamilton around a Grand Prix track, the T754 steers accurately and quickly, with faultless control. Pushed to the limits by the dancing penguins in Happy Feet, it remains composed, and uncovers plenty of detail, while still dishing out a dynamic, open presentation.

Two-channel sound is less emphatic – the latest Arctic Monkeys CD doesn't leave us cold, but the sound does lack some of the raw power and extra layers of detail that some can produce.

The T754's biggest problem, though, is that it costs too much relative to the specification it offers. Onkyo's £250 cheaper TX-SR605 outguns it in most key areas.