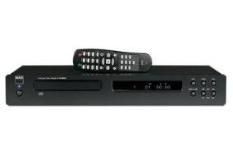 If you remain aloof from the vagaries of fashion, eventually fashion will come full circle and meet you where you stand. We're pretty sure that was said of more, well, fashionable concerns than CD players, but it's wound up being true of NAD.

The company has stuck stubbornly to the not-quite-black battleship aesthetic of its products for years now, and suddenly the C515BEE – all iPod-matt-black and discreetly chamfered corners – is the best-looking player around.

In every other respect, the NAD fights its corner pretty convincingly, too. Specification includes both electrical and optical digital outputs alongside RCAs, the easy-to-read display is dimmable and the remote control feels good in a rubbery, Fisher-Price sort of way. Build quality is every bit as robust as the looks imply.

Vivid and persuasive stereo
Playing a CD of Rockers Hi-Fi's Mish Mash, the 'BEE creates the broadest, most disciplined soundstage of any of its rivals – a truly startling expanse which starts way beyond the position of the left-hand speaker and goes plenty further than the right-hand channel.

This widescreen presentation gives the NAD the opportunity to establish plenty of space around the instruments on the stage and, allied to the player's vivid and persuasive stereo imaging, gives a luxuriously widespread sound.

No detail is too minor for the 'BEE to describe – its ability with transients is particularly impressive – and this trait is allied to an ability to deliver a vocal with torrential levels of emotion and expression. Low frequencies hit hard and promptly, integrate smoothly with that explicit midrange, and treble sounds shine without harshness.

NAD loses its step with Radiohead
Switching to Radiohead's punishing 15 Step shows up the areas where the NAD is slightly less assured. The song's clattering, squelching beat is a swine to make sense of and the 'BEE is a little tentative. The same song's dynamic extremes are also handled rather anxiously – the NAD seems a little reluctant really to cut loose when the material demands it.

That said, these are minor failings. The NAD C515BEE is never in any danger of losing its grip on that five-star recommendation and, if you value emotional communication over all else, it's the best player in its class.