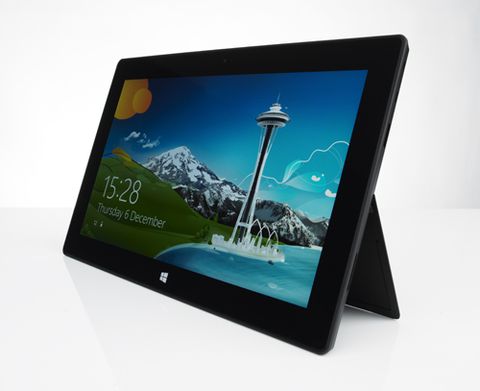 A good attempt at an all-rounder, but the Surface needs some performance tweaks

The tablet market is an intimidating place to be. Apple, Google et al. have all been staking their claim to consumers’ wallets over the past few months. But they’ve been doing so without any competition from a key rival: Microsoft.

All eyes are on the Microsoft Surface RT and whether it can tempt people away from the plethora of rival tablets already on the scene. It’s an intriguing proposition.

A lot of thought has gone into the design and the desire to make a tablet not only a source of fun and entertainment, but also a work tool, with a view to being a potential laptop replacement.

Of course, there’s a danger that a product designed this way could turn into a jack of all trades and master of none but, out of the box, first impressions are promising.

If you’ve been used to cradling an iPad or Nexus 10 in your arms, then the Surface RT may take a little getting used to. The Surface RT is taller than both of these rivals (the screen is 10.6-inches as opposed to the iPad’s 9.7in and Nexus’ 10in) and it’s also heavier.

The jump in proportions and weight can be seen and felt, but they’re not necessarily off-putting. The Surface’s VaporMg casing is made from a molten magnesium alloy, which Microsoft claims is three times lighter than aluminium.

In hand, the tablet certainly feels solid and well-made. The edges of the device aren’t as smooth or as rounded as they are on rival tablets though, and we found the Surface less comfortable to hold.

Besides build quality, you get the impression there’s also been in-depth discussions over the general design and layout of the tablet.

The built-in kick-stand works well and gives a sense of sturdiness and another angle to approach the device from in landscape. Used in this way, there’s a speaker positioned at either end of the device. They’re located near the top edge, so hands don’t obstruct the sound firing out.

There’s also a volume rocker switch and 3.5mm headphone jack on the left hand side while you’ve got a video output, USB 2.0 socket and charging port on the right.

In the middle of the bezel, you’ve got 720p cameras at the front and back. The rear camera has been angled up for use with the kickstand so it’s level with whatever you’re snapping.

The white icon directly below on the other side of the bezel is Microsoft’s home button. Press this and besides a subtle vibration thanks to the built-in haptic technology, you’re transported to the Surface’s home page.

It’s a tiled layout, similar to that found on the most recent Windows 8 smartphones such as the Nokia Lumia 920.

Of course, it’s much more expansive and customizable. You can drag and drop tiles to your heart's content, whether they’re apps, Windows programmes, or different pieces of software stored on the device.

We found it quite a neat alternative to the regimented ways of the iPad and bloatware-heavy screens of some rival Android tablets.

If you want to access the more PC-esque aspects of the tablet, you can tap on the relevant tiles, for Word, Excel and Powerpoint.

Hit the desktop tile and you’re taken to a more familiar desktop PC screen, from where you can navigate the hard drive and manage your files.

Even for experienced tablet users, it can take a little while to get to grips with some of the nuances of the Surface.

Microsoft has ensured that swiping form every side of the device can trigger a response: swipe from the left edge and you cycle through any apps and programmes you have open. You can also multitask, and access two apps running side by side.

Swiping up from the top and down from the bottom reveals an icon which give you access to all the apps on the Surface. When you’re browsing the web, the same gestures allow you to cycle through open web pages.

Finally, swiping from the right edge brings up a simple control panel so you can access the tablet’s settings, share content over social networks via a dedicated ‘share’ button and interact with other devices located on the same network.

The swiping and gesturing isn’t quite as intuitive as the operating systems found on other devices. You’re sometimes left wondering how you just did something or thinking that there must be a simpler way of doing something.

The Surface responds reasonably quickly, but can feel a little sluggish when your fingers are firing on all cylinders. We also found the Internet Explorer web browser slightly slower to load pages, with its rivals regularly pipping it to the post.

Another aspect of the Surface RT which requires more getting used to is the pressure-sensitive Touch Cover which comes as part of the package.

The keys are a little cramped and are only ever so slightly raised, which means your fingers can take a little while to adjust.

It’s functional enough, but we wouldn’t describe it as nice to use. Microsoft has the option of a black Type Cover (below), which is of a similar size, but more like a normal keyboard. It does bring a small improvement in quality and authenticity, but costs an extra £110.

If you want to stream music and video on the surface RT then there are a couple of sources accessible through the home screen.

Xbox Music has a vast library of tunes at your fingertips to stream, and download a la Spotify. You can download unlimited tracks for offline use for multiple devices, for £9 per month. Otherwise you’re limited to just streaming a certain amount.

On the face of it, Xbox music is a nice-looking system with some attractive flourishes, but it isn’t the most intuitive to navigate using the tablet. Some of the screens are a little confusing and the icons and cursors aren’t laid out in the most practical manner.

Video comes primarily courtesy of Xbox Video (a Netflix app is available too) where you can buy or rent movies with prices starting from £3.49. The menus here work slightly better and it’s good to see that a wide range of movies and TV series to choose from.

Apps, however, are quite thin on the ground though, especially compared to what’s available on Apple’s iTunes and the Google Play store.

There are some useful ones in the Windows App store, such as Netflix and 4OD but there are numerous omissions including iPlayer – you need to access this service through the tablet’s web-browser instead. Of course, over time, we’d like to think the App store will be kitted out with much more choice.

Picture quality on the Surface is decent, but not in the same class as the Nexus 10 or Apple iPad. On paper, the tablet’s relatively low 1366 x 768 resolution puts it at a disadvantage and this translates into a less robust picture, with softly drawn edges.

Stream The Dark Knight Rises and it fills the screen superbly thanks to the 16:9 aspect ratio, but there’s a lack of crispness and sharpness: textures don’t look as believable as they could.

There’s an impressive level of detail in the shadows although blacks aren’t particularly deep nor are colours rich. There’s a general washed-out feel to the image.

As you’d probably expect, the Surface RT’s built-in speakers don’t deliver the most convincing sound, but the general standard is hardly high.

Plug in a pair of decent headphones and the Surface sounds perfectly listenable. Play Rihanna’s Diamonds and there’s no real thinness or harshness to the sound.

Detail levels are good, although rival tablets have the edge when it comes to dynamics and refinement.

There aren’t many other tablets if any that offer the same breadth of functionality and features. And, if you’re in the market for a tablet for both work and play, then the Surface undoubtedly has its merits.

But it isn’t perfect, and those that want the simple pick up and play experience of an iPad 4 or Nexus 10 won’t necessarily get along with it. It’s a good effort from Microsoft and with some refinements, the Surface could be even better.