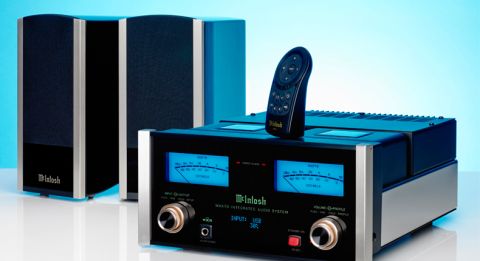 A large dose of McIntosh in a compact package. This is a deeply desirable system, even if the price is mighty steep

We like the MXA70 system. It’s a concentrated dose of McIntosh’s traditional values at a relatively affordable price. Affordable? Don’t laugh; judged by the American brand’s usual standards this counts as affordable.

Let’s get one thing clear. This product’s appeal doesn’t rest solely on absolute performance. If sound is the main priority there are better ways of spending this amount of money, even if you want to do it in a neat and compact way.

We have no doubt something like Naim’s SuperUniti with suitable speakers would better this McIntosh for outright performance, and score higher when it comes to features. But, we think that’s missing the point.

It’s a McIntosh product and, for many, that will be enough. The company has a massively loyal following and we can understand the appeal. We can’t think of another high-end brand with such a long and rich history. Then there’s that gothic-tinged lab equipment look, those lovely blue backlit power meters and of course, McIntosh’s trademark authoritative yet still refined sonic balance.

Add an unerring consistency in engineering approach coupled to high quality build and it’s easy to understand why the company has been trading for over 70 years. An admirable reputation is all very well, but for us a product needs to offer far more than that. Fortunately for the MXA70 system, it does that and more.

What does the package include? You get a Class A/B stereo amplifier with an output of 50-watts per channel, on-board 24-bit/192kHz digital-to-analogue conversion and a top-class headphone amplifier circuit. The headphone amplifier is no afterthought, as it can be on products of this type. It’s a serious design, engineered to get the most from a wide range of ‘phones.

To this end McIntosh has added an autoformer into the circuit to allow more precise impedance matching. In theory, this is a big advantage as far as sound quality is concerned. The engineers have also developed a circuit called HXD (Headphone Crossfeed Director, yes, really) that tries to emulate the stereo imaging presentation of speakers. It works pretty well, adding a degree of spaciousness that’s not normally part of the headphone experience.

It’s not all good news though, as switching on the function – a simple push of the volume control – results in a slight loss of bite and clarity. The MXA70 system can be optimised for use with five different headphones. Each headphone profile remembers settings for amplifier current level (it’s adjustable through the set-up menus), headphone impedance (likewise), HXD on/off and the bass boost setting.

The profiles can be named as part of the configuration.

A small pair of aluminium-cased speakers complete the system. They’re finished in a nice gloss-black and built to a high standard. Take off the grille – it’ll only be temporarily, as the speakers look industrial without them – and you’ll find a 19mm titanium dome tweeter and a 10cm paper cone mid/bass (tuned by a rear-firing port).

These speakers are small, standing around 26cm high but are pretty hefty. The company even supplies short lengths of speaker cable just to make the set-up as painless as possible. If you don’t need the speakers, the main unit is available as the MHA100, saving you around £1000 in the process. The main unit looks just like one of the company’s traditional integrated amplifiers, but scaled down.

It’s robust and nicely finished. This is an expensive product and certainly feels it. We like the choice of remote too. It’s a stubby affair that’s pleasant to hold and easy to use. Astonishingly, those things aren’t normally a given with high-end equipment.

Connectivity is decent. There are balanced and single-ended analogue connections, as well as four digital inputs. The digital inputs include the usual trio of USB, optical and coax as well as the less common AES/EBU.

You’ll need to download specific USB drivers from McIntosh’s website if you have a PC, but can use a recent Apple Mac straight away. As is increasingly common, the USB input works asynchronously, which means the McIntosh takes care of the timing of information; this usually bodes well for sonic performance.

Getting it up and running is no hassle. If you’re thinking of using this as a desktop product (as McIntosh suggests) you’ll need a pretty big desk. The speakers can be positioned either side of the main unit and have a folding rubber-tipped rear foot to adjust their firing angle.

The system sounds good this way, but treat the MXA70 like a proper piece of hi-fi – good, rigid stands for the speakers and a low resonance support for the amplifier - and it sounds notably better.

Playing Dvorak’s New World Symphony (from our Apple MacBook via USB), it doesn’t take long to realise this system is every inch a proper McIntosh product. Its delivery has smoothness and refinement coupled to plenty of authority. The speakers might be small, but they deliver an unexpected sense of solidity and scale.

Low frequencies are full bodied and pack a decent dose of power. Higher up the frequency range we’re pleased with the fluidity and articulation on offer. The tonal balance has an element of richness in the midrange and bass, but not so much that it’s an issue.

Although not wholly neutral, it’s a pleasant balance that retains a good amount of transparency, while introducing a degree of forgiveness for harder, harsher recordings. There’s plenty of insight here. Subtle instrumental strands aren’t ignored, even when the symphony becomes complex. The system’s presentation stays impressively stable and composed when pushed.

We like the stereo imaging too; it’s nicely layered, solid and precise. The sound stage is projected well, and with eyes closed it’s hard to pinpoint the actual position of the speakers. This quality points to low-resonance enclosures, good drive units and well-engineered crossovers.

We switch to headphones – using both Grado PS500s and AKG’s K812s – with good results. The MXA70’s sonic character remains unchanged. It’s still a smooth, spacious sound with a hint of richness at lower frequencies. There’s enough get-up-and-go here to satisfy with the likes of the Rolling Stones but also the finesse to deliver Olafur Arnalds’ Found Songs with the delicacy it deserves.

Rhythmic drive is good, and dynamics – both small and large scale – are rendered with confidence. By the highest standards we notice small shortfalls in timing precision and outright attack, but these things aren’t enough to spoil our enjoyment.

Overall, this is a capable package. This is a compact, classy system that offers a fuss-free way to owning a McIntosh product, while still enjoying a good standard of performance. The MXA70 isn’t perfect but we still want one.