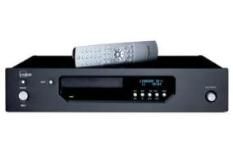 Provided the CD1’s abilities match your musical tastes, you’ll not find a better player for the money

For some people, this will be the best sub-two grand player on the market. If you value detail resolution and strong dynamics above all else, we can't think of another machine that does better.

And it comes from a company better known for its striking-looking digital amplifiers and work on subjects such as room-correction, which tailors the sound of your system to suit the space in which it's used. Hardly surprising, then, that the CD1 is a relatively conventional-looking piece of equipment – at least by the standards of the company's Millennium digital integrated.

It only takes a listen to Prokofiev's Romeo & Juliet to show that the Lyngdorf's insight is quite stunning – in outright terms, this player isn't far short of matching our reference Naim CDS3. Considering the Naim costs around ten grand with its outboard power supply, that's clearly a pretty impressive accomplishment.

Convincing balance, and punch
You can add a convincing tonal balance to the list of plus points, and plenty of punch, too. The Lyngdorf pulls off the tricky feat of combining a weighty and powerful bass with class-leading agility: few rivals manage that.

In fact, in nearly every sonic respect this machine matches or betters the class leading players at this price level. Well, every respect apart from timing, that is. Rhythm-driven music, such as Wyclef Jean's Ecleftic loses some momentum, and with it the ability to truly engage the listener. So if you mainly listen to rock, hip-hop or anything upbeat, take a good long listen before you choose this player over its competitors.

Concentrate on classical and other music that doesn't rely on timing for appeal, and we're sure you'll find none better at this price.

Normally, we'd take a star off the overall rating for a weakness like this, but so good is the Lyngdorf in so many areas that it doesn't seem fair, particularly when you consider the spectacular build, slick transport and clever control system that allows the user to fine tune the player's ability. If the CD1's measured approach to rhythms doesn't annoy you, this is a machine you can buy with total confidence.