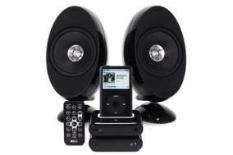 Lacks sonic panache, but works pretty well on a desktop

In the high-end arena (in speaker dock terms, at least), it seems more boxes are the way forward. Even taking that into account, KEF's PicoForte Three is taking things a bit far.

The separate dock and amp are almost identical, and tiny. Most people will sit one atop the other, though they can sit side by side. The arrangement isn't ideal as it introduces more cables into the mix than is strictly necessary. A good point is that the system's remote lets you control your iPod menus, unlike the handset supplied with B&W's similarly priced Zeppelin.

Build quality of the sats is very impressive – no surprise as they're the speakers from KEF's Award-winning 3005SE set-up, our favourite home-cinema style speaker package. It's also not that surprising these speakers are bass-light, as they've been designed to work with a subwoofer. There is a sub output on the amp, but KEF doesn't sell a matching unit as yet.

Bass-light system
A sub would probably be a sound investment, as the one thing this set-up lacks is depth. Play American Music Club's Patriot's Heart, and it's obvious this isn't the case only with pumping techno or rock – the system lacks weight with guitar-led Americana as well. And the body we'd expect from a system at this price is AWOL.

With smaller-scale performances, say something from acoustic singer Mazzy Star, and there's an impressively realistic stereo soundstage with vocals ruling the middle ground and well-developed instrumentation.

Overall, this is a listenable system, but one let down by a lack of weight and superior new rivals.