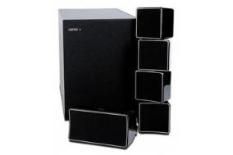 This three-time Award-winner has finally met its match – still great value for money, though

It takes a seriously good product to win one of our Awards, so the fact that the Jamo A102HCS5 package
has won three in a row should be a clear indication that it's extremely impressive indeed.

Of course, the longer you spend at the top, the bigger a target you are to your rivals. And as the star rating above indicates, after three years of dominance the Jamo has finally been usurped as the affordable style speaker package of choice.

Still looks the business
It may be a little long in the tooth, but you wouldn't guess that based on the Jamo system's styling.

Sure, the subwoofer's a bit on the ‘dull black box' side, but that's pretty de rigueur for systems of this type; and besides, the satellites are discretely styled and very solidly built.

This is a system that doesn't contain five identical speakers. Instead, you get a pair of two-way A102 speakers for the front-left and front-right; two A10 SUR speakers that look identical but have a single, full-range driver; as well as a bigger A10 CEN for the centre.

It's a combination that serves Justin Timberlake's FutureSex/LoveShow Blu-ray well, offering terrific focus
to the vocals and excellent precision in the various instruments and sound effects.

Thrilling punch and attack
The level of punch and attack from the satellites is thrilling, but the subwoofer also proves to be
a surprisingly musical unit, with a tonality and rhythm that helps it blend in seamlessly.

The three-dimensional soundfield isn't quite as seamless, though. Although this wasn't something we'd found to be a problem in previous tests, the Jamo's new rivals demonstrate that it is possible to achieve a greater degree of envelopment from speakers of this type and price.

As it is, when playing the early car chase in the Eagle Eye Blu-ray, the odd little gap is evident as surround effects are handed from one satellite to the next.

This also leads to a lack of spaciousness and three-dimensionality to the performance when compared with other comparably priced systems.

What we had picked up on last time round was a little fizz in the Jamo's treble: it could be baited to brightness when pushed hard or poorly partnered, and this is evident again throughout the movie, as the tyres screech and windows smash at high volume.

Again, rivals such as the Boston Acoustics SoundWare XS5.1 and Teufel Motiv 3 offer greater control at the top end.

Let's reiterate: this Jamo package is still an excellent one – especially given the bargain prices it's available for if you shop around.

It's just that new rivals have appeared that are better overall, meaning our triple Award-winner drops a star.