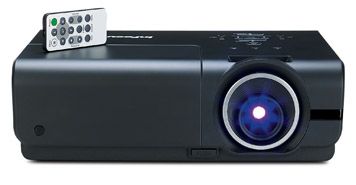 It’s not perfect, but the big, pretty pictures are undeniably tempting at £800

It’s not wrong to want a massive screen. Incredible detail, fancy motion processing and all that are great, obviously, but it’s hard to beat the spectacle of a truly huge picture.

It can be fixed to a mount or ceiling bracket, but the SP8600 seems really to be designed for more occasional, spontaneous use.

It’s relatively light and portable, has an 1800 lumens lamp, which makes it usable in fairly bright conditions, and it has a built-in 3W speaker.

A little tricky to set up
It’s worth pointing out, though, that there’s no lens shift, so the only way to alter the direction in which the image is thrown is to swivel the unit left or right and adjust the front foot for height.

Combined with the fairly long throw, this relative inflexibility can make it a bit tricky to get the InFocus’ picture to properly fit a particular space.

Still, if you have a portable screen or are simply happy to make the effort, the picture the SP8600 produces is decent.

With the Full HD resolution of 1920 x 1080, Never Let Me Go is presented with impressive detail and sharp edges, with little of the pixelation or obvious jaggies you often get with affordable projectors.

We's like deeper blacks
The colour palette is a reassuringly mature and balanced one, too, and while motion isn’t perfect, it has less smear and judder than many rivals at the price.

This isn’t a perfect performance, though, and while the SP8600’s brightness is pretty impressive, it doesn’t go as deep in the blacks as we’d like, even at £800.

It doesn’t have a great deal of insight into these blacks, either. It’s worth pointing out, too, that the speaker doesn’t go particularly loud, so it’s probably not worth really relying on as your only method for getting movie sound.

That massive image remains tempting, though, and niceties such as the twin HDMI inputs and a five-year warranty are pleasant sweeteners – just make sure you know what you’re getting into before taking the plunge.