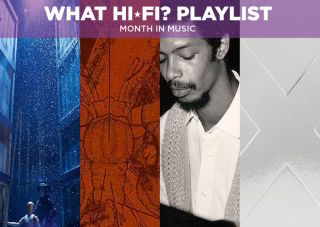 As much as David Bowie, Nina Simone and every Hans Zimmer soundtrack on earth have become staple listening material in our testing rooms, we at What Hi-Fi? are always eager to discover (and re-discover) new (and old) music – an easy feat nowadays thanks to the fastidiousness of music streaming services.

Every month, we’ll be figuratively opening our test room doors to share what we've been listening to and the new releases we're looking forward to hearing.

So if you find yourself regularly hovering tentatively over a music service’s search bar, or you want a new CD or vinyl recommendation to stop you listening to The Dark Side of the Moon again, this one’s for you…

I’ll thank the Heritage Orchestra and Pete Tong for helping me rediscover Orbital’s back catalogue (for the umpteenth time).

The orchestra’s stirring live versions of dance music anthems are well worth experiencing (even if just on CD or via your streaming service of choice), but the inclusion of Orbital’s classic Belfast had me once again revisiting the influential electronic duo’s first albums.

They may not have been big on album names, but with a first album that includes timeless classics Chime and Midnight, and a second that has arguably even better stood the test of time, Orbital’s early work remains required listening for anyone with so much as a passing interest in electronic music.

Listen to Orbital 2 on Spotify or Tidal

Buy the Orbital 2 album at Amazon

The album we've used for testing

Before the Dawn by Kate Bush - Becky Roberts, staff writer

Before Kate Bush’s 22-date Before the Dawn tour in 2014, the world had waited 35 years for her to return to the stage. So in hindsight waiting just two for the arrival of that live album, which was released last month on CD and vinyl, wasn't too much of a hardship.

Thanks to the recording’s exceptionally faithful production, the triple CD is a fantastic way to relive the live show or indeed experience it for the first time.

Everything from the emphatic rendition of Lily and the surging strings opening Cloudbusting, to the elegiac inflections of her near-perfect vocals in Dream of Sheep and Among Angels, sound destined to be played through a proper hi-fi syste. And our What Hi-Fi? reference system has relished the task.

Presented as raw as a steak tartare, Before the Dawn manages to convey the decadent atmosphere almost as well as the music. It's not just the rapturous crowd appreciation, the show’s stunning visuals – the waves splashing around the tank in which Bush was submerged; the helicopter emerging from the ceiling of London’s Hammersmith Apollo; and the eerie on-stage monologues permeating The Ninth Wave – aren’t just imparted by the booklet’s artwork.

Buy Before the Dawn on CD at Amazon

As is often now the way, my first brush with Gil Scott-Heron wasn't through one of his original songs, but through a sample - Kanye’s West use of Gil Scott-Heron’s Home is Where the Hatred Is in the track My Way Home.

Remembering to track it down – an easy task nowadays – it led me to Heron’s The Revolution Begins: The Flying Dutchman's Masters.

Heron's politicised lyrics delivered in spoken verse and soundtracked to guitar twangs and rhythmic drums give the album a distinctive sound that's both of its time but pleasingly timeless.

Not just an enjoyable listen but a reminder of music’s capacity to shine a light on more important topics than sex, drugs and rock 'n' roll (although there's plenty of that here too).

Listen to The Revolution Begins: The Flying Dutchman's Masters on Spotify

Buy The Revolution Begins: The Flying Dutchman's Masters on CD at Amazon

For years I’ve had to defend my love for Jamie Cullum. I’m not about to get into that here - the man’s an ivory-tickling genius as far as I’m concerned – but I’ll admit his latest record could definitely tip the balance into guilty pleasure territory.

Show Me the Magic is an original Christmas song that has all the elements you could want from a festive tune – a big band sound, the twinkling of a piano, a catchy melody and even a dashing of sleigh bells. It’s so festively big band you could picture Michael Bublé – Mr Christmas himself - covering it on his next album.

The song was written in just a couple of hours and was recorded at Abbey Road with a full jazz orchestra.

Catchy? Definitely. Cheesy? Maybe a little. But after the year that was 2016, an unapologetically feel-good song like this one is quite the treat.

Listen to Show Me the Magic on Spotify

Buy Show Me the Magic by Jamie Cullum on Amazon

I See You by The xx - Adam Smith, staff writer

The smooth, clean, airy sound of The xx is a firm favourite in the What Hi-Fi? test rooms and the band's new music can't come soon enough as far as we're concerned.

The xx claim I See You is going to have “a more outward-looking, open and expansive approach”, and if the new single On Hold is any indication it’s an approach that will be very welcome on my iPhone and hi-fi systems up and down the land.