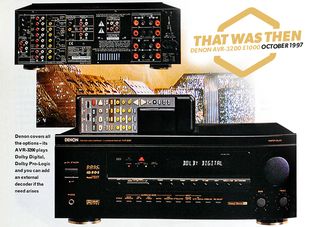 Denon is rightly considered one of the giants of home cinema.

It was only just getting into its stride back in 1997 though, when the five-star AVR-3200 was helping to build a firm foundation for the brand’s burgeoning reputation.

Even at £1000 this was one of the company’s more affordable amps, and still incorporated cutting-edge technology for the time.

There was advanced digital processing and an RF input to accept the new-fangled Dolby Digital from Laserdisc. Despite chunky proportions the AVR-3200 had just five channels – all that was required – each rated at a heady 70W.

In the review we made great play of the preamp outputs for the front three speakers (allowing biamping) and dedicated six-channel analogue input.

The AVR-X2300W tested in the August 2016 issue is a world apart from the old timer in terms of brainpower and digital connectivity.

It’s also considerably easier to use. Accurate automated set-up helps, as does a simpler menu system. Seven channels of power amplification are the norm now too.

Add Dolby Atmos capability and a sound that combines finesse with muscle, and you have an amplifier that more than lives up to Denon’s rich heritage.

Let’s not forget, the new amp costs just £500. That really is progress.