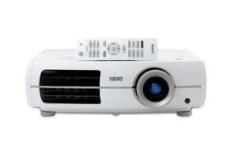 Considering we review on a performance per pound basis, there's a lot to be said for shaving a few quid off when it comes to boosting a star rating.

So it has come to pass with Epson's EH-TW4400 LCD projector, which we previously reviewed at £3000 – and four stars. Only beaten by the “very best around” at its old price, we expect it to be pretty darn good.

In terms of specification, don't expect the Epson to turn up and make a mockery of everything offered elsewhere. Instead it falls in to line and nods confidently as we rattle off the list of necessary home cinema projector specifications.

Easy to dial in a great picture
A claimed 130,000:1 contrast ratio, 1600 lumens brightness and a quiet 22dB fan is joined by two HDMI inputs, component, S-Video, RGB and composite connections.

Setting up projectors nowadays tends to be a doddle and this Epson is a good example. There are no motorised controls but you'll find zoom and focus controls on the lens, plus simple lens shift wheels to move the image left, right, up and down.

A quick run through a THX disc and all's well. And that's before we mention the picture.

The Inception picture has a polish that Mr. Sheen would be happy with, being almost free of digital noise and sporting sharply drawn edges to objects.

Colours are natural but punchy with that contrast ratio proving capable of the best dynamic colour range
on show here. Scenes in bright sunlight show this best, with colours sitting happily alongside solid and detailed darker shades.

Subtlety and detail
There's subtlety and detail to skin tones with the best level of insight available at this price. Motion is handled confidently for the most part, with only the trickiest of scenes seeing the Epson image-thrower losing a little grip.

Switch to a lower-resolution source, and while the drop in quality is naturally apparent, the EH-TW4400 is no less capable of getting the very best out of the source material, with an insightful, clean and balanced image.

It looked promising on paper; in practice it's even better. Panasonic has had this price-point tied up, but could this Epson end all that?