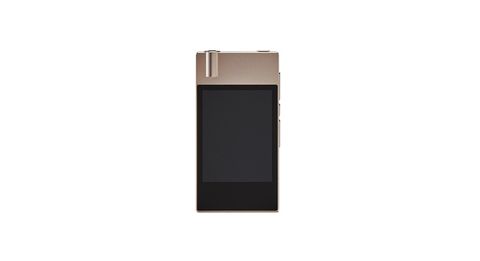 Cowon is known for its small, inexpensive yet rather impressive music players - and the latest to come through our testing rooms is the Plenue J. It's a slimmer, lighter, altogether pinker version of the five-star Plenue D.

The Plenue J doesn’t look like the rest of Cowon’s range.

Our review sample is a rose-gold affair (called ‘Jupiter Gold’ - ‘Misty Ocean’ is also available) that has foresaken the smooth back and rectangular design of its kin in favour of something new.

Most striking is the cylindrical ridge at the top of the player for the 3.5mm headphone output, which Cowon says “invokes images of walls and pillars in ancient Greek temples”. It also offers greater protection to the connection, which makes much more sense to us.

That means there’s a lot of empty space at the top of the player, and the Plenue J has a large chin at the bottom too – we’d estimate the screen, slap bang in the middle, probably takes up half of the player’s body.

At a time when the screen is pretty much the whole body on many other gadgets, it doesn’t exactly scream "modern!".

On the back, meanwhile, is a plastic, ridged coating that feels a little like a tiny washboard. While there’s no doubt it improves grip, some people might prefer the more streamlined designs of other players.

There are some design flourishes that Cowon devotees will recognise, however: the button layout on the right-hand side of the player – volume switches, power and playback control – and on the left is a port for a MicroSD card to expand the Plenue J’s 64GB of internal memory to 128GB.

The device charges via microUSB, and Cowon claims it can last for approximately 53 hours of MP3 playback.

Unfortunately, this doesn’t quite meet the ‘thinner, lighter and longer-lasting’ specification Cowon has set out for. While it’s certainly the first two, the Cowon Plenue D manages to keep going for a claimed 100 hours before requiring a recharge.

Much like the Plenue D, the Plenue J can support 24bit/192kHz in FLAC, AIFF, ALAC, WAV, WMA and MP3 formats.

Navigation remains similar too. Use the touchscreen to move around its gridlike user interface, which sorts your music into categories including genre, artist and year.

While many portable music players have operating systems that could do with being streamlined – compared to smartphones, they can often be a little clunky – the Cowon is relatively straightforward to use.

It’s also more straightforward on the Plenue J than on any other Cowon player we’ve come across. Compared to this, the D feels too small, while the Plenue R (£500) has pointed corners that dig into the hand. Even with its small screen, the Plenue J manages to hit that sweet spot.

Cowon’s range of EQ settings, called JetEffect 5 sound processing, also pops up on this player. That gives you a host of options from ‘Reverb Stadium’ and ‘Feel the Wind’ to more traditional genre modes, such as 'Rock' and 'Jazz'.

'Rock' will give you a bit more punch at the expense of detail and a harder edge but, as with other players, using these modes comes down to personal preference.

One feature we’d liked to have seen is Bluetooth connectivity. With Cowon promoting the Plenue J on its portability, it would be nice if it worked with all available headphones, wired or wireless.

Plug some headphones in and you’ll be met by the same great sound quality as the Cowon Plenue D. In fact, to our ears the difference between the two is minimal – which is exactly what the company intended.

We plug in AKG’s K550 headphones and play Fleetwood Mac’s Go Your Own Way (24bit/96kHz) and hear the same potent dynamism from this player – the punchy, bouncy chorus unfolds with an excitement that’s hard for the competition to match.

It also demonstrates good handling of rhythms. The tingling strums of the track’s opening guitar shimmer onto the soundstage snappily, and it’s not long before our foot starts tapping along.

As the drumbeat starts, the Cowon Plenue J delivers it all in an enjoyable, tightly timed presentation.

This player treats low-frequency tones, such as the drumbeat, with the weight and punch they deserve.

There are times when they thwack into your ears with a definitive kick, but the Plenue J doesn’t overstep the mark when it comes to sounds higher up the frequency range by trying to make them bigger than they are.

Switching to Unbelievers by Vampire Weekend, Ezra Koenig’s singing in the midrange comes across clearly and with insight. The natural sibilance in his delivery is recognisable without being overstated, and midway through the song when the rest of the instruments drop out – leaving just Koenig’s voice and an uptempo drumbeat – both elements are balanced nicely.

The Plenue J manages to keep instruments separate and present them spaciously, while still delivering the song as a cohesive whole. The distance between voice and drumbeat is palpable, but you never lose the sense it’s building to a crescendo in the climactic chorus.

With their very similar sound and price, choosing between the Cowon Plenue J or the smaller Plenue D comes down in large part to personal preference about design.

The Plenue J is easier to use, has more built-in storage and is slimmer, whereas the Plenue D has a bigger battery and is £40 cheaper.

Ultimately, if the J tickles your fancy, you’re not going to be disappointed by the way it delivers your songs.

See all our Cowon reviews