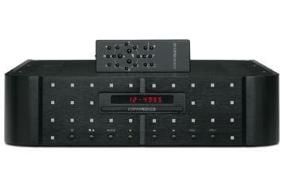 Take the leap of faith beyond the familiar Solos, and this hefty-looking and solid-sounding system will delight

One-box audio systems are nothing new, but there's been something of a revival in this area in recent times.

Companies such as Arcam, Meridian and Primare have grabbed the high ground, while on the fringes are the likes of Audio Analogue and Shanling.

So, is the Consonance by Opera Forbidden City - Ping (to give it its full name) mainstream or fringe?

A bit of both, actually: it uses a high-quality CD transport, loaded using a slim drawer below the display, to feed a digital-to-analogue conversion system, using neither oversampling nor digital filters for as clean as possible a signal path.

The 100wpc amplifier is of Opera's Cool Class A design. Inputs - CD, an auxiliary input and a USB1.1 connection - are switched to the amplifier using gold-plated relays, accessed by front-panel buttons or the remote handset, and there's also a built-in FM/AM tuner.

Finally, the Ping has what the company calls SpAct on its USB input, designed for very low jitter even when playing music from your computer.

It all adds to the air of a thoroughly well-sorted system, while the solidity of build and the quality of finish will be enough to dispel any old prejudices about the 'Made in China' tag.

The big solid slabs of aluminium forming the casework create a fine impression of value for money, and even the metal remote feels weighty, being quite unlike the usual plasticky handsets often included with even the most expensive of equipment.

What's slightly less expected is just how good this unusually named system sounds. It has weight, control and confidence in abundance, sounding much more like a relatively high-end CD player and amplifier being used together, rather than an all-in-one unit.

Even the tuner is rather good, with excellent openness and clarity to the sound, although the bass is slightly on the light side.

There's good dynamic ability, and this speed extends right down into the bass, often an area of weakness for systems of this kind, which can tend to go for the warm and lush as a means of covering their tracks.

Add to that a midband fully capable of bringing out all the character of voices and solo instruments, plus the open, sweet and spacious treble, and you have yourself a fine one-box system. With a silly name.