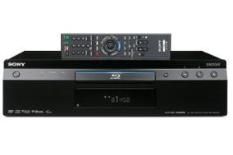 Here’s a player that’s easy to live with, priced favourably and a real stunner with movies and music

The Sony BDP-S5000ES carries the cheapest price tag in the test (although no player is immune from a price hike given the volatility of the market), yet it doesn't look or feel like an inferior product.

Build quality is on a par with the Denon DVD-3800BD, Marantz BD8002 and the Pioneer BDP-LX91. The solid, partly slanted, aluminium fascia gives the player a serious look – the number of buttons on the front is kept to a minimum to help preserve the solid, chunky appearance.

The player's FB (Frame and Beam) chassis uses metal of varied thickness to reduce unwanted vibrations. Even the player's feet have been off-set in an effort to minimize outside interference.

BD Live and high-def audio
The Sony isn't outdone with features either. Specification is thorough and ranges from full Profile 2.0 and BD-Live status to onboard decoding of all high-definition audio formats. There aren't many players that are as easy to operate as the 'S5000ES.

The XMB (XrossMedia Bar) menu system derived from the PlayStation 3 games console enhances the appeal. The menu system and remote control combine to give a smooth user experience.

This also extends to the speed at which the Sony loads Blu-ray discs – The World is Not Enough loaded over 20 seconds faster than the Denon DVD-3800BD, Marantz BD8002 and the Pioneer BDP-LX91. Using a variety of discs, the Sony was consistently the quickest loader here.

Of course, all these niceties count for nothing if the player dishes out a pig of a picture; the 'S5000ES has no such issues. The Blu-ray of James Bond's Quantum Of Solace looks wonderfully three-dimensional.

Forgetting Sarah Marshall is detailed and colourful but never ventures into being overly vivid. Only the Pioneer could claim to have the edge with regards image quality.

The Sony really stakes its claim on the test win by complementing its pictures with awesome sound. The 'S5000ES perfectly layers the surround effects, dialogue and score of Quantum Of Solace, keeping the viewer entertained despite the puzzling storyline.

Explosions hit you with a fine sense of solidity, with the edges of bass notes expertly defined. With CD playback, music is well-marshalled, with vocals and instruments all having their own place.

Dynamically, the player hits every high and low – by Blu-ray player standards, the Sony has a seriously rhythmic and musical side to its character, and is one of the best we've seen.

Such is the Sony's all-round ability that we're left searching for holes, caveats, and provisos that simply aren't there. For the money, it can't be faulted.