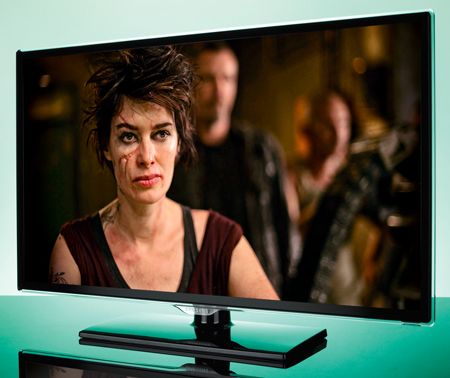 The ES5500 is exciting to watch, but some rivals offer even more for the money

Samsung has been generous on the features front with its 2012 range of
TVs, no matter what the screen size.

The Samsung UE32ES5500 is a good looking set, and its slim frame contains a multitude of apps and online features that will keep you entertained for hours.

Smart Hub is where all the action happens. BBC iPlayer remains one of the best catch-up TV services, and Samsung raises the stakes by now also offering ITV Player.

Samsung UE32ES5500: Smart TV apps
And if you want to relive all the glory of the London 2012 Olympics and keep up to date with all the latest football and Formula 1 news, then the BBC Sport app is a great feature.

There’s also plenty of scope to access media stored on external devices in the AllShare Play section, either via the built-in DLNA capability or by directly plugging them in via the USB ports.

As the price might suggest, this set doesn’t include 3D or the additional Freesat tuner offered by Samsung's more expensive UE32ES6800.

Samsung UE32ES5500: Picture quality
The first impression of the ES5500’s picture is that there’s a lot of excitement and punch on offer. With JJ Abrams’ Star Trek on Blu-ray, the picture bursts with strong contrast and rich colours; the vivid reds and blues of uniforms sit brightly alongside shiny lights inside the USS Enterprise.

Whites do glare a bit, but that can be toned down by lowering the backlight levels. The black levels aren’t as deep as the Panasonic TX-L32ET5B or Sony KDL-32HX753, and there's not much in terms of low-level detail.

In fact, the variance between contrasts and colour tones can be quite coarse and tend towards being overblown, leading to a little detail loss.

Both the ES5500 and ES6800 tend towards unsubtle colours, but the ES5500 remains dramatic and robust even when turning down the levels to achieve a more natural look.

Its images are sharply defined, which adds to the glossiness of the picture, and makes watching standard-def TV rather fun – but, with every object etched in sharp relief, some of the natural three-dimensional perspective is lost.

There’s also a hint of noise on the picture, but while motion isn’t class-leading, it’s stable enough to not be distracting provided motion-processing is on low (any more and artefacts appear).

The sound quality on offer isn’t as solid as the Sony, but it’s decent to listen to, with clear dialogue. There are plenty of audio presets to make the sound bigger, clearer or smoother, but we preferred to just leave it on Standard.

Samsung UE32ES5500: VerdictThe UE32ES5500 faces direct competition from the Panasonic TX-L32E5B, where a relatively noise-free picture and subtler contrast give a more natural performance – but the Samsung is an exciting and feature-rich set that’s really worth a look.

See all our TV best buys