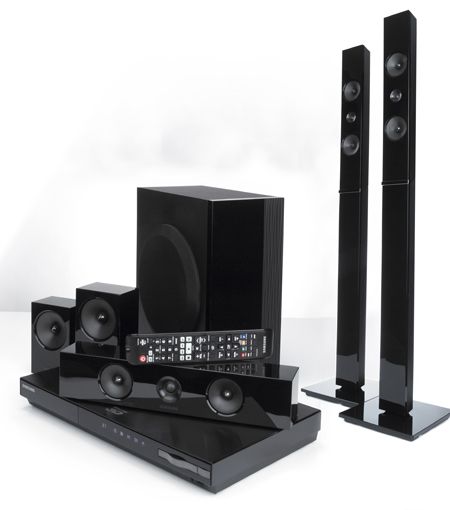 Plenty of bang for your buck, and a fine choice for a big, boisterous sound

Samsung makes a habit of delivering bells and whistles as standard – and there are few better products to show that off than a home cinema in a box.

This Samsung HT-E5530 5.1 system has tall floorstanders at the front and tiny compact speakers for the rear. They’re nicely finished, although the bare chipboard on the back of the sub looks a little cheap.

And for under £500 it’s on the front foot from the start: as well as sporting a 3D Blu-ray player, this system has Samsung’s Smart Hub of internet TV features, which include Acetrax and Netflix for movies, TuneIn Radio, YouTube, an internet browser and more.

Samsung HT-E5530: BBC iPlayerThere’s still no sign of iPlayer – a bone of contention across much of Samsung’s 2012 range – but we’re assured it should be live by the time you read this. You can connect via a wired or wi-fi connection and the Hub is easy enough to navigate.

There’s an iPod dock (it’s a separate wired unit) and support for Bluetooth streaming and connecting to networked hard drives, while an integrated FM radio, plus USB and auxiliary inputs, give you plenty of other content options.

Elsewhere, two HDMI inputs and one output let you connect other sources, such as games consoles, to take advantage of the speaker system. It sounds big.

Samsung HT-E5530: Sound quality
Those tall front speakers help the Samsung deliver a sound with more scale than many rivals. The decent sub helps, too, adding weighty but controlled and relatively agile bass. Flick on Samsung’s ‘3D Sound’ and you can add even more presence, which helps music really fill a room, albeit while sounding a little less organised.

The tallboy speakers can rather dominate at times, however, meaning front-to-back cohesion and the overall sense of surround sound isn’t quite as strong as others – although that power and excitement is the trade-off.

You’ll need a decent 3D screen to display them on, with good depth and subtlety, should you choose to take the plunge with the HT-E530.

Samsung HT-E5530: Verdict
All told the Samsung has a wealth of features and functionality to offer, and for the most part the level of performance is plenty good enough.

See all our home cinema in a box Best Buys