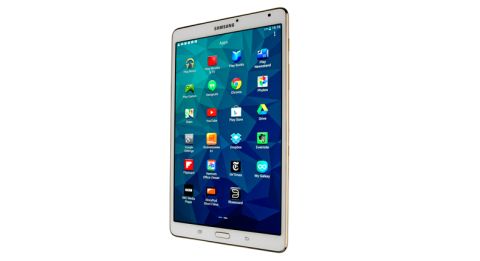 The best from Samsung so far, but we need more in the audio and video stakes

Samsung’s tablet strategy has not always been clear. At times, it’s been downright confusing with the number of options it’s had on offer at any one time.

To clear things up somewhat, the Galaxy Tab S is Samsung’s current flagship range and it’s available in two sizes, 10.5in and 8.4in.

We’re testing the smaller of the two here and, in short, it’s the best tablet we’ve seen from the company to date.

When it comes to features, the Tab S 8.4 matches its bigger brother spec for spec - packing an Exynos octa-core processor (yes, that’s eight cores), 3GB of RAM and a Super AMOLED display.

It’s a largely plastic construction, and while it can’t match the luxury feel of the aluminium-bodied iPad mini with Retina display, it feels solid and well made. It’s slim too, 6.6mm thick, and weighs 294g.

One thing it has over its Apple-flavoured rival is a microSD card slot, allowing you to boost the 16GB on-board storage by up to 128GB – much cheaper than forking out for the largest capacity iPad mini, which is worth considering if you store a lot of music and movies on your tablet.

The fingerprint scanner from the Galaxy S5 has made its way to the Tab S, and works in the same way, by sliding your finger over the home button.

You can register up to three fingerprints per device. While it worked almost every time during testing, it’s a still a little awkward, and not as slick as Apple’s TouchID – entering a PIN to unlock the tablet can be as quick.

We do like the ability to use it to authorise payments via PayPal, though.

The screen on the Tab S has to be one of the most visually impressive we’ve seen at this size.

Packing a resolution of 2560 x 1600 and squeezing 360 pixels into every inch, it pips the iPad mini when it comes to on-paper specs – but it’s the brightness of its Super AMOLED panel that really sets it apart at first glance.

This makes it great for using outside in sunlight, and superb for browsing and general day-to-day use, with crisp text and vivid colours.

However, it doesn’t actually translate to the Tab S doing a better job with video when put up against the iPad mini with Retina display.

Compare the same HD clip and you will see that the iPad’s colour palette is much better balanced – there’s more subtlety to tones and textures in scenery and faces.

The Samsung palette is subtler than it has been previously, but could still go a little further towards neutral for our tastes.

When it comes to contrast, it’s no surprise the Tab S’s AMOLED screen does a great job at producing seriously inky blacks that are noticeably better than those on the iPad.

However, while bright, its whites aren’t as defined and have an occasional blue tinge, when viewed off-axis especially.

To be clear – the Tab S is capable of crisp, detailed and enjoyable video performance that is a big improvement on what we’ve seen on previous Samsung tablets, but the iPad mini still has the balance we’d pick.

Audio is a step up from previous Samsung devices too, with high-res playback a feature on this device (first seen on the Galaxy Note 3). With regular WAV CD rips, it’s a more precise performance than we’ve noted before, with improved timing and more get-up-and-go.

Switch to Michael Jackson’s Thriller (24-bit/176kHz) and there’s understandably more detail and a touch more subtlety, but it’s still on the lean side when compared with the full-bodied iPad mini, ultimately losing out on bite and attack.

Usability and performance is noteworthy. The Tab S’s battery life is good, and we found we could easily make it through a day of regular use, at a sensible brightness level, with plenty to spare at the end of it.

Watch stacks of HD video and you will drain the battery quickly, though even then you should get through at least a couple before you start to see any serious dent.

Whizzing around menus and jumping in and out of apps is lag-free, as it should be with as much power under the hood as the Tab S has.

We like the new Multi View screen that allows you to run two apps on a split screen – we’ve seen this before but they were always independent of one another.

Now you can share text and images between them – a nice touch. The camera on the Tab S is one of the better ones we’ve seen on a tablet, though that’s not automatically a recommendation.

But its rear-facing 8MP snapper does a good job of capturing crisp, detailed and well-balanced images in good light, supported by, unusually, an LED flash.

The Galaxy Tab S 8.4 is the best tablet we’ve seen from Samsung, and it’s up there as one of the best Android tablets we’ve tested too.

The nearly year-old iPad mini with Retina display still outperforms it in both audio and picture quality (though it has limited capacity, of course), and that’s not something we can overlook.

So while this may well be one of the best Android tablets on the market right now, it’s still just the best small tablet that isn’t an iPad mini.

Not enough for five stars.