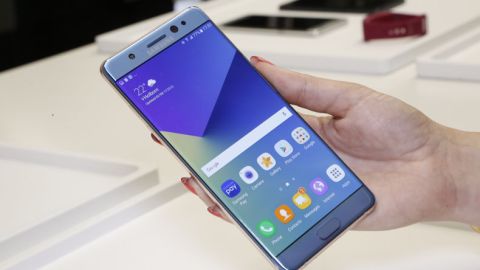 The Galaxy Note 7 has been recalled and we don't recommend you buy it - which is a shame, because it could have been a great phone

This review was written before Samsung recalled the Galaxy Note 7 following a number of incidents of the phone catching fire. It has since been withdrawn from sale, production has been halted, and all existing owners have been advised to turn off and return the phone. As a result, we have removed the star rating from our review and can't recommend the phone. We had no issues with our review sample, which was part of the first batch of Note 7 devices, and this is our original Galaxy Note 7 review, which we publish for posterity. We don't recommend you buy this phone.

It’s been a while since we’ve seen the Galaxy Note family around these parts. Last year, the latest iteration of Samsung’s popular phablet – the Galaxy Note 6 – wasn’t released in the UK or the rest of Europe, leaving a big stylus-shaped hole in our top smartphone line up.

What we did get was the Galaxy S6 Edge+, a gorgeous larger handset and Best Buy Award winner no less, but despite its dashing good looks and top-class performance, it didn’t scratch quite the same itch as the Note had done for the past five years. It was missed. This year it's back.

With a 5.7in screen, the Note 7 is one of the biggest phones you can buy right now. Except it isn’t. Samsung has been clever with the Note 7’s design – so much so that it doesn’t feel much bigger than the 5.5in Galaxy S7 Edge, and it’s actually smaller than the 5.5in iPhone 7 Plus.

Samsung’s penchant for barely-there bezels means it’s been able to squeeze the 5.7in display into a more compact body than you might expect. It’s also borrowed some curved-screen tech from the Edge family, which sees the Note 7’s front and back glass panels curving round gently to meet one another.

It’s not quite as pronounced as the S7 Edge, but its subtler approach is just as lovely to look at, creating a beautifully symmetrical, premium-looking design that makes it feel smaller in the hand.

Perhaps most importantly, this is a big screen phone with a purpose. The increased size has real uses and benefits and is, perhaps for the first time, a big-screen phone truly without compromise.

Elsewhere, the rest of the design is business as usual, with a power button on the right hand side, and a volume rocker on the left. There’s also the home button that doubles up as a fingerprint scanner, plus two touch icons either side for back and multitasking.

Along the bottom, you’ll find a new USB-C port alongside the now-hallowed headphone jack, as well as the Note’s S Pen companion embedded into the right-hand edge of the phone. On top you’ll find the SIM tray and microSD card slot for expanding the phone’s 64GB on-board storage.

Finally, like the S7 and S7 Edge, Samsung has made the Note 7 waterproof to IP68, perfect for surviving the great British weather, an accidental dunk in the sink or a spot of swimming for up to 30 minutes at 1.5m.

The Note 7’s 5.7in screen borrows the 2K AMOLED display that Samsung has bestowed on the rest of the top-end Galaxy family. This means a slightly smaller pixel density at 518ppi, but it’s not something you’ll notice – this screen is as crisp as the rest of the Galaxy family, and brighter too.

As with other Samsung phones, you have the option to choose your colour balance, and we lean towards the Basic mode. This makes whites a little less punchy and takes some of the Samsung vibrancy out of colours, so if you prefer this look it’s worth experimenting with the AMOLED Photo setting – we find Adaptive and AMOLED Cinema oversaturate things too much for extended watching.

There’s very little difference between the Note 7’s picture performance and that on the S7 Edge, but that’s no bad thing. Blacks go equally deep thanks to the AMOLED screen, and contrast is good, with plenty of detail up for grabs in the shadows and highlights.

Edges are crisp and well etched and there’s plenty of subtle detail in textures and landscapes that makes for a thoroughly immersive viewing experience.

The extra brightness helps give it some extra oomph for outside viewing too, and makes it the first handset capable of supporting HDR video. All we need now is Netflix or Amazon video to make their HDR content viewable on mobile.

The Note 7’s bigger display helps make the most of your movies on the go, not to mention more room to browse websites and use the included S Pen stylus.

With the main specs of the Note 7 also shared across the 2016 Galaxy range, the Note 7 has a few tricks up its sleeve to make it stand out – and they may well be the reason you’d buy it over any of its siblings.

Of course, the pièce de résistance has been the S Pen stylus, and this year it’s better than ever.

For a start, Samsung has made it twice as sensitive and added a finer tip, to help mimic the feeling of writing with pen and paper. It’s certainly the best, most natural stylus experience we’ve had so far, and budding artists will really appreciate the increased pressure sensitivity.

The S Pen also gets some great new functionality, including a translation tool, a GIF creator and the option to write pin notes to the Always On display. While the S Pen felt like a bit of a gimmick, it now feels like a real selling point of the Note 7 – somehow, it’s made styluses cool again.

The Note 7 also has a front-facing iris-scanner, so just like in the movies, you’ll be able to do away with PINs and unlock the Galaxy Note 7 with just a glance. But it’s not quite the stuff of James Bond just yet.

Firstly, it can be picky with how it reads your eyes, recommending a rather unnatural grip of 20cm away, straight out in front of you. We got it to work at a closer range, but it’s more hit and miss.

Also glasses, laser eye surgery or even just heavy eyes after a late night can limit its ability to scan your eyes accurately, not to mention screen protectors, scratches and lighting vastly different to when you originally scanned your eyes.

From our experience though, it works more times than it doesn’t, but we still find it quicker, easier and more reliable to stick to the fingerprint scanner.

The Galaxy Note 7’s cameras have been taken straight from the Galaxy S7 and S7 Edge, meaning it packs a 12MP main snapper and a 5MP selfie cam. Cameras on the Note 7’s siblings have been among the best we’ve seen this year, and it’s the same story here. The camera app is a joy to use, keeping things simple for the most part, with a manual mode and RAW shooting available.

Double tap the home button and you’re taken to the capture screen, the camera being just as quick to focus and fire thanks to its super-fast dual-pixel focusing technology. Results are great too, with pictures sharp and colours vibrant but believable. There’s plenty of detail here that lesser cameras smooth over, and tricky lighting conditions are handled well thanks to an intuitive auto-HDR mode.

Speaking of tricky lighting, the Note 7 joins the S7 and S7 Edge as being one of the best smartphone cameras for dealing with low light conditions, thanks to built-in optical image stabilisation and a wide f/1.7 aperture.

It shies away from the over-processed look of some low-light snappers, and keeps noise at bay too, all while digging out a decent amount of detail from even the murkiest scenes. It’s impressive to say the least.

Unfortunately, the 5MP front-facing cam isn’t quite as notable. It’ll do for selfies, but it has a tendency to make your skin look overly smooth and unnatural.

Audio hasn’t been a focus for Samsung in quite the same way as it has for LG, but the recent run of Galaxy models have shown subtle improvements to its sound since the days of the Galaxy S4 and S5. Even better, the Note 7 delivers the best audio experience out of any Samsung handset we’ve heard yet.

It’s subtle, but there are definite improvements here compared with the S7 Edge. Dynamics shifts are bigger and more precise, timing is tighter and the level of detail we heard previously is subtler still in the Note 7.

It’ll go louder too, which it handles with real authority, sounding clear, solid and controlled all the way up to maximum volume. Like the rest of the Galaxy family, it supports hi-res 24-bit/192kHz files, but it’ll do a fine job with any bitrate, offering a clean, well-organised performance that’s tonally balanced and well considered.

Samsung has called on the winning combo of its own octa-core Exynos 8890 processor and 4GB RAM to power the Note 7, the same pairing that’s running the S7 family, and to great results. The Note 7 chomps through all manner of multitasking without breaking a sweat.

From HD streaming to graphic-heavy gaming, everything we throw at it is handled without issue, while the streamlined TouchWiz interface proves itself to be smooth and stutter-free. The reduction in pre-installed bloatware is a welcome change too.

At 3500mAh, the Note 7’s battery is just a touch smaller than the S7 Edge, but despite its larger screen, it’ll just about match it for longevity. We stream a 90-minute Netflix video at full brightness with wi-fi on and saw a 13 per cent drop – the same as the S7 Edge.

In real terms, most users will manage a day’s streaming, browsing and messaging without needing to activate any of the battery saving modes. Power users will benefit from the included fast charger, which boosts the battery by up to 50 per cent in 30 minutes, plus fast wireless charging is on board too – though you’ll need a compatible charger.

Finally, the Note 7 follows in the Galaxy family’s footsteps by being IP68-rated, for waterproofing at depths of up to 1.5m for up to 30 minutes. Unlike previous iterations, the phone will continue to work without being affected by droplets on the screen.

They say absence makes the heart grow fonder, and after a year’s break, the Samsung Galaxy Note looks in better shape than ever before.

It cleverly borrows some of the best bits from the already excellent S7 family, but innovates with new functionality for that all-important S Pen, which makes more sense than ever before.

It’ll always be the smarter, slightly geekier sibling in the Galaxy line-up – and that it’s proud of – but it’s now every bit as stylish as its peers too, adding yet another desirable phone to Samsung’s already impressive arsenal.