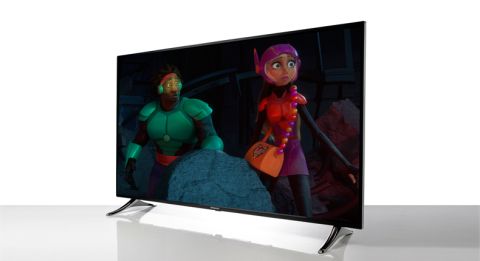 A few years ago, the name Polaroid conjured images of nostalgia-inducing cameras and pocket-sized prints. More recently, the company has proved itself in the TV market as one of the few go-to brands for budget TVs.

Exclusively sold in ASDA supermarkets in the UK, Polaroid TVs have been constantly pleasing in offering good-quality pictures for peanuts.

Bearing that in mind, it’s not surprising that its debut 4K TV, the Polaroid P55D600, will undoubtedly be one of the cheapest ones of its size you will see this year. And perhaps even the next.

The P55D600 is the only 55in screen in the brand’s 4K line-up – there is a 65in model too, just toppling into four-figure territory. But ultra-cheap and Ultra HD isn’t always a recipe for success (last year’s one-star review of the £450 4K Bush set vouches for that), so is this Polaroid a pleasant surprise?

Sadly, there are compromises when it comes to 4K compatibility. Without the necessary codec hardware onboard, it can’t stream 4K from services such as Netflix and YouTube – the platforms almost single-handedly driving the 4K content movement right now.

Its HDMI spec meets the new 2.0 iteration, so should be compatible with Ultra HD Blu-ray players when they arrive later this year.

For now though, our test mostly comprises of regular content. Regardless of resolutions, £700 is still a cracking price for a TV of this size – especially when its performance-per-pound is so good.

Play 22 Jump Street on Blu-ray and we’re happy with the Polaroid’s upscaling quality, even if the comedy itself disappoints. Every edge is well etched and the clear, high-contrast picture is full of visual punch (translating well onto 3D performance when we try it out).

The film is an attack of colour, giving the Polaroid a chance to flaunt its dynamic (and slightly overblown) display. In the American football scene, the grass pitch is lush and the blues and reds on the jerseys are vivid. There’s not much subtlety on offer, but you get the general gist.

MORE: 4K TV, Ultra HD - everything you need to know

Running the Polaroid with a THX Optimiser disc is highly recommended, particularly for sorting out the colours. We found them more natural-looking on a cooler colour temperature setting.

Up next is the not-so-epic conclusion to The Hobbit trilogy, The Battle of the Five Armies on DVD. It’s a movie that deserves Blu-ray treatment, but the Polaroid does its best. Lines are well sculpted – every soldier in the mass army has definition – and there’s enough detail and clarity to enjoy even the darkest scenes.

In the final battle scenes, the sea of bodies flung through the air draw a bit of motion instability that we couldn’t eliminate with picture settings.

We are also a little disappointed by the SD channels, which involve soft lines and misjudged shades of colour.

In terms of sound quality, it goes comfortably loud and has reasonable body, but we’d invest in a soundbar such as the Philips HTL5140 for a welcome boost in solidity and detail.

Polaroid hasn’t built on its core smarts of Netflix, BBC iPlayer and YouTube since last year’s models. But having correctly identified them as the most popular apps, has separated them in an exclusive tab in the smart hub.

The menu consists of a vertical drop-down bar, which is the gateway to settings, the media browser and smart hub. It’s hardly the snappy, sophisticated WebOS (from LG) or Tizen (from Samsung), but is fairly responsive and easy to operate, at least.

Elsewhere, there are few surprises. You aren’t paying for a premium design, so understandably the Polaroid’s is fairly unadorned. A word of caution about the stand it sits on: it requires a tabletop that’s roughly 110cm wide and 35cm deep at the minimum. Not practical for everyone, we’d imagine.

Polaroid sticks with last year’s chunky remote. It’s not the most luxurious affair, but perfectly functional once you’ve worked out some of the ambiguous icons.

This Polaroid isn’t going to rock your world with 4K streaming and the like.

But if you can live without it and simply want a decent-performing big TV at a good price, the Polaroid is worth a punt.