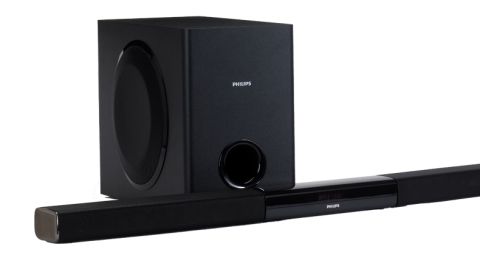 Best soundbar up to £300, Awards 2014. Everything a budget soundbar should be: insightful, balanced and unobtrusive

If we had one criticism of Philips’s brilliant debut soundbar - the HTL5120 - when we reviewed it earlier this year, it was its slightly screen-blocking height.

There’s no such problem with its brand-new successor, the HTL5140. At only 5cm tall (a third less than its predecessor), it’s one of the least obtrusive designs we’ve laid eyes on. And it has a subwoofer boosting its efforts.

As the rather compact square-shaped packaging suggests, the bar is made up of three individual parts: two detachable metal-mesh ends – each hiding four racetrack drivers and two 25mm mylar tweeters – and a central glossy black control panel, where you’ll find simple touch functions and a clearly readable text display (which has three brightness options).

Slot the parts into one another and, with a click, you have a slim, sturdy 105cm-wide bar that extends just beyond the width of a typical 42in telly. Although we prefer the ultra-flat design of the LG NB4540. the HTL5140's build is far from distracting – the 5cm tall bar won't block your viewing, that's for sure. It doesn't draw attention to itself, and keeps a low profile in front of your telly.

For best performance, the whole of the bar should lie flat, so make sure your stand is big enough.

The bar partners a wireless subwoofer – it has a side-firing 20cm driver and raises the total power to a claimed 320W. It might be another box to house, but its reasonably slender build makes it easy to tuck away.

We’re fond of the HTL5140’s sleek and functional design, which is only bettered by its wealth of connections. Far surpassing our expectations at this price, there’s HDMI, optical, 3.5mm and USB inputs, as well as Bluetooth (aptX) with the added convenience of one-touch NFC pairing.

An HDMI ARC output, too, means your external devices (Blu-ray players, set-top boxes etc) can be connected directly into the bar, with only one HDMI cable running from the bar into your TV.

With a rounded back and rubber buttons, the remote resembles the handset Philips supplies with its TVs.

It’s better than most efforts we see, though a quick glance is often needed to avoid pressing the wrong side of the rocker buttons.

The remote opens doors to Virtual Surround Sound and umpteen other sound modes (including ‘Night Mode’, which flattens dynamics when the kids have gone to bed), and a button to match sound to picture if it’s out of sync.

Design and build win our good word, but it’s the HTL5140’s sound quality that rubber-stamps our appreciation. Balanced, dynamically expressive and well integrated, the HTL5140 takes this year’s budget ‘bars to new heights.

During our test, we compared this Philips with every new rival we could get our hands on, and it won out easily. For £270, you should expect a fair jump in quality from your TV speakers – after all, that’s the point.

We flick between the Philips and our reference 48in Samsung during Transformers: Dark Of The Moon, and find the Philips delivers far greater scale and dynamic build-up.

There’s more information where detail is concerned, and more density to the Decepticons’ stomps as they trample through Manhattan. Through the TV, they sound small and light-footed.

The way this ’bar does voices is pleasing: Optimus Prime’s carries weight and insight, and there’s clear distinction between those speaking with and without helmets on.

Of the seven sound modes on board, ‘Auto’ and ‘Balanced’ get our vote for the most even and subtle presentations. Alongside an impressive midrange, highs and lows don’t let the side down. As shards of glass fall down the glass-faced building in slow-mo, their tinkly sound effect is clear and defined.

Down south, the sub brings enough beef: the clunking of metal as the Autobots twist in transformation is solid, and there’s deep rumble when the rocket launches. That sub certainly earns its stripes.

Gunshots are sharp and precisely mapped within the soundfield – as the flying Decepticons bolt corner-to-corner across the screen, there’s an obvious diagonal dimension to the projection.

The ‘Surround’ mode effectively bolsters the soundfield, giving the sound of helicopter propellers wider swing, though dialogue is a little drowned out as a result. Subtle too, the HTL1540 keeps track of the robots’ faint mechanical clicks as they move their limbs in dialogue-driven scenes.

Our satisfaction isn’t short-lived as we load up The Stone Roses: Made of Stone on Blu-ray. The finale concert has detail and energy, the Philips showing a good grasp of rhythm and tempo in the bass guitar tab. The electric riffs have a sense of pizzazz, while vocals are solid yet articulate.

Philips’s latest range of soundbars is off to a flying start with the HTL5140.

The company has taken the HTL5120’s successful sound recipe and packed it into a wonderfully slimline package that’ll suit almost any set-up. If that’s not deserving of five stars, we don’t know what is.