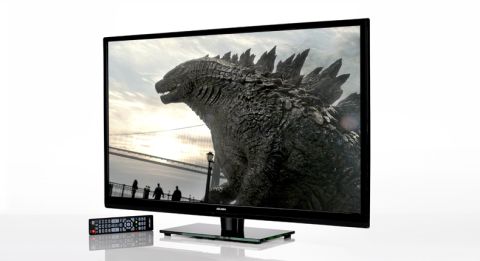 Low price, lower quality: this budget 4K TV is to be avoided

A 4K TV for less than £500! That’s quite something, considering the exorbitant prices bandied about just six months ago. Too good to be true, you say? Well quite.

What seemed so appealing on paper turns out to be a massive disappointment. For this, dear reader, is the cautionary tale of the Bush LE-39GBP-A.

Considering it’s a budget TV, we’re not surprised to see it has a very ordinary design. A glossy black rectangle sits atop a glossy black pedestal.

It’s the same look favoured by hundreds of the more cheerful sets to pass through our doors. It’s inoffensive, and the build is strong enough to give the impression of sturdiness.

We’ve seen prettier sets for a similar price, but then again none of them aspired to handle Ultra High Definition. Take a tour around the back and it’s a stripped-down offering.

There are three HDMI 1.4 sockets, a USB port, Scart (with adaptors for component and composite input), VGA for use as a monitor, and a Freeview antenna. Digital audio is handled by an optical output, and analogue by 3.5mm headphone jack.

There is no internet. You don’t get wi-fi, and there’s no ethernet socket either. That means there is no smart content of any kind, and certainly no Netflix 4K. Your only source of 4K, then, is through HDMI, although the 1.4 certification means it will come at a maximum 30Hz.

According to the latest guidelines set forth by the CEA (Consumer Electronics Association), that means this isn’t Ultra HD.

As always, we begin by calibrating the picture, starting with a THX Optimizer disc. The experience could be better. The interface looks dated and utterly workmanlike.

Given the lack of smart features, we hope what remains will be vaguely polished. Not so. It doesn’t help that the settings are rather limited.

There’s no way to adjust backlight levels, for instance, and there are no processing options except noise reduction. To make things worse, it’s not particularly responsive.

Button inputs are usually accompanied by noticeable lag. Occasionally we have to wait several seconds between command and reaction.

Time for video, and our feature presentation is a selection of Ultra HD film clips and stock footage.

It seems the Bush is fussy about inputs, because it refuses to yield a single pixel when confronted with our server – which we’ve used successfully on many other 4K TVs.

It doesn’t help to have our source rejected when content is already so rare. And it’s not as if we can use Netflix 4K either – because there’s no web connectivity.

We aren’t expecting the lovely picture of pricier sets, but the performance could be better. Pixel chasers will be satisfied, as it’s appropriately sharp and detailed.

But we note some motion instability, and colours are not subtle. There is little nuance in the shading and gradation is poor, especially around contours.

This is more apparent when we’re closer to the screen. On better sets, it can be almost like looking out of a window. Here, the image gets patchy if you get too close.

Blacks are fine for an LCD panel, but there’s little differentiation between the shades of dark. White-level distinction is even less clear.

While we wait for 4K to take off properly, most people will be viewing ‘just’ 1080p – so we spin a few Blu-rays. It’s a serviceable picture, but hardly satisfying.

Without the benefit of the full eight-million pixels, the lack of subtlety becomes even more apparent. Motion is still unstable, colours look unnatural and whites are even harder to distinguish.

You don’t have to move too close to the screen before you start noticing the rather clumsy patches of colour. Alternatives to Blu-ray? There’s no 3D, nor is there Freeview HD.

We’re less fussed about the 3D, but it seems rather limited for a TV of this price not to have HD TV channels these days. We re-tune the TV several times and scroll all the way through just to make sure.

We take the plunge down to standard definition, and the picture is shockingly bad. It’s hugely unsubtle. Colours are downright garish, and detail is poor.

Those patches of unsubtle shading return with a vengeance. And that’s just on DVD. Given a Freeview feed to chew on, the Bush introduces all manner of noise and fuzz.

You can set noise reduction on high, but that’s like bringing a dinghy to the Titanic. Processed, and not in a good way. From standard definition all the way up to 4K, there is some kind of motion-processing that makes everything look over-etched.

The effect isn’t overblown, but it is distractingly artificial. And it looks like there’s no option to turn it off either.

Bundled with the TV is the Seiki U-Vision cable. It seems like an ordinary HDMI cable, until you see that one end has a USB cable sticking out. It’s supposed to draw power from your TV.

Does it work well? Not really. The picture does get sharper, but everything looks awfully processed and artificial.

We never expect much from the sound of flatscreen TVs, but still we find ourselves disappointed.

The Bush is sharp and brittle, with little weight anywhere on the frequency scale. More than once we find ourselves wincing.

We cannot recommend this TV in any way. It barely fulfils its promise of 4K, and it lacks upscaling skills to fall back on.

The picture is poor in Full HD, and we’re frankly aghast at the SD performance. And that’s before we consider the technical limitations.

We’re disappointed with the lack of web connection, smart connectivity and Freeview HD, which were seen on similarly priced TVs even two years ago.

This is a most futile investment of time and money.