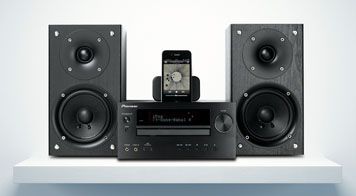 It’s not flawless, but the X-HM70 gets plenty of things right

Where perceived value is concerned, a piece of metal goes a long way at this price. The Pioneer HM70 is no better specified than either of its rivals in this test; its build quality isn’t glaringly superior and its remote control is par for the course too.

But its fascia is fashioned from a nicely tactile slice of aluminium, and we reckon that makes it an outright leader where showroom appeal is concerned.

Well-specified, and a wireless option
As we say, its specification is comparable with its competitors, and that means it’s extensive.

It will even join your DLNA network wirelessly if you cough up £50 or so on the AS-WL300 adaptor.

The speakers are a two-way design (with a sizable rear-firing reflex port that makes them less of an against-the-wall proposition than is ideal), and perfectly adequately finished.

Where network- or USB-derived information is concerned, the Pioneer is capable of handling up to 24bit/96kHz FLAC files.

Offered the same lossless copy of The Roots’ The OtherSide to handle via a wired network, iPod and CD, the HM70 delivers a pretty consistent impression of the song.

In absolute terms, there’s probably greater scale and separation offered by CD, but in general this is a confident, up-front listen with a decent grasp of timing and a smooth integration of the frequency range.

Communicative and detailed
Low frequencies are relatively straight-edged and positive, with just about sufficient weight (unless you put the speakers close to a wall or, heaven forefend, deploy the P.BASS setting, when they become altogether overstated and mushy).

The midrange is genuinely communicative, pleasingly detailed and more able than most to convey a vocalist’s emotional state. At the top end there’s a little glare, but the Pioneer avoids overt hardness even at volume.

On the subject of volume, the HM70’s quite game – it’ll have a manful stab at filling a medium-sized room with sound without succumbing to shoutiness. Big volumes do result in a loss of composure as far as timing and organisation go, but by prevailing standards the Pioneer’s quite an authoritative device.

Nothing’s perfect, of course, and even at this modest price point, there are areas where the Pioneer could improve.

That toothy treble reproduction is the most obvious, but we’d also like a better balance struck at the low end between the ‘slight hesitancy’ and ‘mindless over-confidence’ modes it currently operates in.

And this micro takes a good while for it to realise it has an iPod in the dock. But for now the X-HM70 is a fine, enjoyable all-rounder.