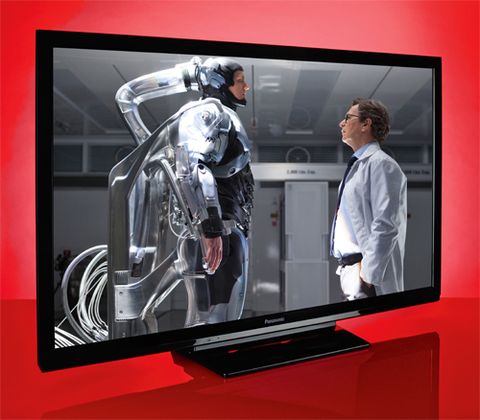 The large screen and punchy picture are highly attractive for this price, but you’ll have to forego the smart features and Full HD resolution

A 50in Panasonic plasma screen for under £430? That’s too good a deal to ignore. So what’s the catch?

Well, it’s not Full HD. And it doesn’t have any smart features. But don’t dismiss this screen on spec alone.

The TX-P50X60B sits in the lower range of Panasonic’s 2013 TV line-up, so it’s not surprising that a lot of frills have been trimmed to make way for its budget price.

After all, 50 inches is a considerable amount of screen estate, and its HD Ready status means it will still accept 1080p images.

The TX-P50X60B comes with all the benefits of a plasma screen: incredibly deep and velvety black levels with bursts of punchy and vibrant whites.

While it’s not the clearest or sharpest picture, the strong and exciting contrast will draw you in, and the vivid, rich colours (if somewhat overblown) are pleasing to the eye.

The Panasonic has either to upscale (in the case of standard-definition content) or downscale (with Freeview HD channels and Blu-ray discs) to fit the image to the screen’s native 1024 x 768 resolution.

That’s a lot of processing going on inside the panel, and this does take a toll on the final picture. Images are never as sharp or subtle as they would be on a native Full HD screen, but the Panasonic TV has a good stab at delivering a convincing picture.

There’s a slight yellow tinge that we’ve seen on Panasonic plasma screens before, which does accentuate the lovely glowing quality to the bright whites and warm highlights.

Dark scenes look bold and dramatic, bright scenes are punchy and inviting – this Panasonic is fun to watch, and the large screen adds to the excitement.

The lack of Full HD resolution, however, is plain to see. We’re not expecting the talents of a top-range plasma screen here, but the edges of objects are rather fuzzy compared with rival budget sets such as the £330 Finlux 40F8073-T.

Characters tend to mesh into the background, while the lush black levels are prone to swallow up finer detail. Subtle gradations of shading are overlooked, and colours end up looking overstated.

It’s not the slimmest of slim TVs, but the sturdy and slightly heftier build is reassuringly stable.

The TV’s sound is decent, although it still takes a sharp, treble-heavy approach. If you want a fuller, more satisfying sound experience, we’d recommend investing in a budget soundbar or soundbase.

Connections are limited to two HDMI inputs (one of which supports an Audio Return Channel), and one USB port (for playing stored media files).

The essential Freeview HD tuner socket shares space on the back panel with single component and composite inputs and an optical output.

We’re not expecting a wealth of connections on a budget TV, but the Panasonic feels particularly stingy.

The absence of any network capability leaves us somewhat bereft, but you can, of course, easily gain smart features and on-demand services via a Blu-ray player.

It makes sense that Panasonic has had to cut out a lot of the bells and whistles to make a sub-£500 50in screen possible.

On the plus side, this does make the TV simple to use – minimal menus, no fiddly smart features and a responsive remote control all make for a seamless TV experience.

We have, though, started to take smart content for granted, and some features are missed.

Panasonic’s excellent and intuitive My Home Screen interface, for example, is absent, and it would have been nice to have at least one TV or video on demand service – BBC iPlayer for example.

At this budget end of the market, it really is a matter of compromise, and whether a large screen outweighs smart features will be down to personal preference.

There are a lot of compromises with this Panasonic TV, but what it does offer is admirable.

A 50in screen for £430 is the highlight, while the plasma screen’s talents with deep blacks and glowing highlights is always enjoyable.

It may not be Full HD, but it has a vivid and colourful presentation to keep you interested.

If you’re on a tight budget and a decent large TV is your main priority, then the Panasonic TX-P50X60B is well worth your attention.