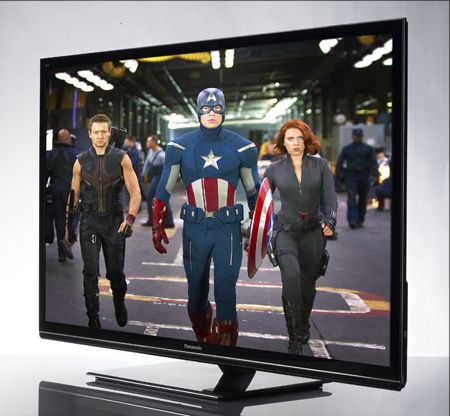 The Panasonic TX-P50GT50 is part of the company's replacement strategy for last year's line-up, for which the term 'runaway success' could have been coined.

The company's televisions took nothing but praise from us in 2011, walking away with the TV Product of the Year award and four more best in class gongs to boot, including being our favourites at 42in, 46in and 50in.

So here we have the new 50'' Panasonic GT50, with the TV high-ground to defend. Set expectations to high.

Those of you who followed developments last year, or perhaps have since swotted-up using the Awards section of the website, will know that Panasonic didn't win all those plaudits by pushing the boat out when it came to features or the latest technological advances.

Simply, its all-round ability at putting pictures on the screen did the trick – and a first glance at the 50in GT50 model suggests Panasonic will again be making this a key focus, though with a little more in the smart features department for 2012.

And the company's started with the basics with the GT series: a brand new panel, alongside a new filter and a faster processor. Those are three massively important aspects of any smart TV's make-up.

The TV uses Panasonic's G15 Progressive Full-HD NeoPlasma display panel, and on the picture-processing front Infinite Black Pro, High Contrast Filter Pro and the 2500Hz Focused Field Drive are all new for this year. These are designed to deliver those deep, dark black levels, dynamic contrast and super-smooth motion respectively.

The Dual Core Pro4 Processor meanwhile will help deliver a superfast Smart TV experience. complete with full support for Flash content via the free web browser, while also allowing you to 'multitask' between apps within the Viera Connect hub.

The connectivity on offer on the GT is more predictable but no less impressive. Four HDMI inputs and three USB inputs form an orderly line on one side of the TV with an SD card input nearby.

Connections for the Freesat HD and Freeview HD tuners, plus ethernet, digital optical and component and composite video connections are a just a cable stretch away.

Panasonic chooses to cluster all the inputs and outputs together, eschewing the trend for putting an HDMI input on each side, which is helpful should you have devices approaching from all angles.

As well as the ethernet port for a wired internet connection, the Panasonic TX-P50GT50 has an integrated wireless network (Wi-Fi) receiver, so no need to add an optional dongle. There’s Bluetooth, too, designed for connecting a wireless keyboard and mouse for use within apps such as Facebook, Twitter and the Viera Connect Smart TV web browser.

Oh, and if you want to Skype using your TV, you'll need to add Panasonic's TY-CC10 HD Communication Camera, pictured below.

DLNA certification allows you to connect to and stream from a NAS device, or indeed any certified product, such as a computer running standard or third-party media server software.

Panasonic supplies a fairly standard but nicely finished pedestal stand with the TV: this screws in to the back of the TV easily enough and then affords a degree of swivel action for perfecting your viewing angle, while a Panasonic wall-bracket, the TY-WK4P1RW, is available as an option.

The remote control is similarly predictable in design but again thanks to a few subtle changes – a few less buttons, a change of font, a glossy black finish – makes for a refreshed feel for the new range.

Turn the TV on and you're prompted to get straight involved with Viera Connect, Panasonic's home for everything internet-connected. In fact, you're prompted to enter the online hub every time you turn on unless you dive in to the menus and turn this feature off. So we do, nice as though it is to be reminded.

Panasonic has kept faith with its familiar menus, which again have simply been given a subtle lick of paint every so often. Thankfully, while they may not be desperately exciting they're intuitive so it's easy to get started.

Next we tune the Freesat HD and Freeview HD tuners, and test the wired and wireless connections, which both connect no problem.

Now on to the sorting out the GT's TV picture. This is a THX-certified TV, so you have a choice of THX modes within the viewing mode. You can still make adjustments to the rest of the picture settings once you've done this. We chose to follow our familiar calibration procedure using the standard viewing mode as a base, preferring the colour balance.

While there's plenty to experiment with by way of picture settings, it's not as involved or as demanding as other sets out there. The adjustments to contrast, brightness, colour and more move in bigger steps, meaning while there's less room for fine adjustment it's easier to find the 'right' setting to our eyes.

And there's no reason why that shouldn't be a good thing. It should make it easier to get the best picture from the TV – and clearly these less subtle adjustments haven't indicated a less subtle picture in past models.

The option of Freesat HD and Freeview HD tuners simply ensures the set will appeal to everyone one. although we'd imagine not many people will be choosing between the two. Luckily, both are excellent.

Watching standard-definition content the picture is detailed and gives an impressive sense of depth. Images are clean and reasonably free of blocking or noise, with the Freesat tuner arguably just a little sharper, though there's very little difference.

Switch to the HD channels and edges are more cleanly drawn, colours are punchier and black levels are impressive.

Play a Blu-ray and the picture just gets better. The image of Avatar looks stunning even in 2D, as you might expect given how extensively Panasonic has used it for demonstration purposes!

Watch the explosive finale and the Panasonic delivers a brilliantly vivid picture full of detail. Every aspect of performance is handled expertly: there's no issue with fast motion, the colours look vivid and dynamic but still with solid, deep black levels, while the level of insight to faces and landscapes is exceptional.

Naturally standard-definition DVDs don't have quite the same wow factor but the TX-P50GT50 certainly gets the best out of them: the strengths of this set – deep black levels, bright colours and smooth motion – ensure the key aspects are dealt with confidently.

Agreed, whether or not you use Panasonic's Intelligent Frame Creation tends to be a matter of personal preference, but we found it to work effectively without looking unnatural or introducing instability when set to minimum.

Panasonic's active-shutter 3D glasses have been tweaked in style, making them lighter, slighter and more comfortable as a result, and also adopted Bluetooth rather than infrared as the method of communicating between glasses and TV.

Certainly the connection seems robust, and the Panasonic helpfully pops up an icon that not only shows the glasses are connected but also how much juice – they’re rechargable via USB – they have left.

Watching 3D seems more comfortable, and the picture more robust, than with previous generations. There’s very little issue with fast motion and the rest of the picture still looks punchy and bright.

When you switch from 2D to 3D, you'll need to check the TV’s picture settings, as they’re unique to the 3D mode, and they're lost when you switch back and forth, though Panasonic’s THX3D settings work well.

All told, and that slight annoyance aside, the TX-P50GT50 offers a small but worthwhile 3D performance upgrade.

Panasonic is not alone in struggling to settle on quite what to call its internet TV content – hello, Sony – but it seems to have at last settled on Viera Connect. The hub is simply arranged one big icon at a time in a seemingly endless series of windows.

It's fully customisable so without too much fuss you can shuffle your favourite apps on to the front screen or however you so choose. Add more by clicking through and downloading them from the Marketplace – doing so seemed rapid for us.

It's easy enough to navigate though it has a few foibles – we'd like to be able to just move up and down the screen and on to the next page of apps without having to go to the much smaller 'more/back' icons, for example, while we feel like pressing 'return' ought to bring us out of an app rather than having to go to 'exit'.

The content itself is better than last year, with the very latest version of BBC iPlayer, the addition of Netflix, a fully functioning Skype app and the likes of Acetrax, BBC News, Eurosport, Facebook, Twitter and YouTube.

BBC iPlayer content looks great, too, especially the 'HD' channel, which gives SD off-air content a run for its money (providing your network is up to speed).

While we're getting clever with this Smart TV, we have a play with the remote apps. The Viera Remote app for Android allows you not only to control your TV but swap content between the screen and your smartphone or tablet. An iOS version is due any day with similar functionality.

It’s very clever, offering touch-sensitive scrolling, voice and text input and the ability to flick content from your smartphone to the TV and vice versa.

Press the Viera Tools button meanwhile to access any media content on an SD card, USB hard disk or indeed a NAS device on your network. We do just that and connect to our NAS to play some FLAC files.

We'd want some external speakers to really make this worthwhile, but one thing we do note is the rapid, nigh-on instantaneous speed at which this Panasonic TV connects, browses and streams. Must be that dual core processor.

As we said, we'd ideally do this TV justice with some external speakers but for a television, the sound's not too shabby either. You can set the distance from the wall, adjust bass and treble and even try the virtual surround modes.

We stick to the 'music' mode as it seems a little fuller compared to 'speech', and it does a good job with speech and doesn't harden up if you watch anything a little livelier. On the subject of sound, it's worth pointing out the Voice Guidance Settings that talk you through the settings.

Panasonic TX-P50GT50: the What Hi-Fi? Sound and Vision verdict

So what have we learnt? Panasonic is back with a vengeance in the TV market for 2012. Last year's GT30 almost swept the board at our Awards last year and the TX-P50GT50 is the GT30 – but better. And comfortably better.

Pictures are more dynamic and detailed, the smart TV hub is faster and with more content, and there are neat additional upgrades and features from the 3D glasses to the new apps that can enhance your television experience.