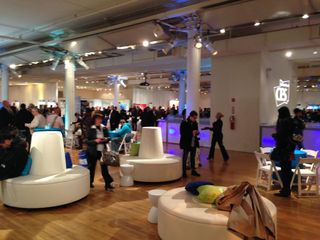 Gary Shapiro, President and CEO of the Consumer Electronics Association, certainly wasn’t hiding the CES light under a bushel. He explained that at 1.95m square feet and with over 3200 exhibitors already confirmed, CES 2014 is set to be the biggest yet.

2014 looks far more promising than 2013 in terms of consumer spend, Shapiro confirmed. Thanks to games consoles, phones, tablets and Ultra HD 4K TVs appearing on more-or-less everyone’s wish-list, the projection is that 2014 will see 4% growth in spend on consumer electronics.

The CEA interest in Ultra HD TV is undeniably huge. The CEA is partnering with the Digital Entertainment Group (the organisation that pioneered DVD and Blu-ray) to ensure content is plentiful and readily available, and every TV manufacturer has set aside its own acreage of floor-space to show Ultra HD to its best advantage.

Among the many Tech Zones will be, for the first time, a High-Resolution Audio Experience zone. According to Shapiro, consumers are “poised to embrace” high-resolution audio and, with the likes of HD Tracks throwing its not-inconsiderable weight behind the push to bring really high-quality audio to the masses, 2014 might be the year that high-resolution audio finally impacts the mainstream.

There will be new Innovation Awards for 2014, including a category for Wearable Technologies. There is, apparently, a Wrist Revolution underway. Your reporter is only slightly ashamed to admit that the Wrist Revolution announcement was accompanied by sniggering from the UK contingent. But then it had been a very long day.