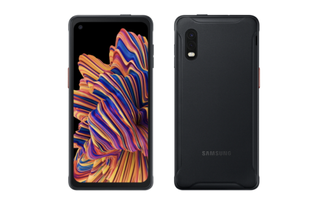 For those of us who remember removing the entire back panel of our Nokia 3310, slotting a fresh new battery in bottom first, matching up the battery contacts, squeezing the whole thing together again and hoping for the best, Samsung's new Galaxy XCover Pro will doubtless raise a nostalgic smile.

Yes, it used to be easy to find a mobile phone with a removable battery. But the unibody, fully-sealed designs of modern smartphones mean you’ll struggle to find anything boasting this feature today.

Not so with the Samsung Galaxy XCover Pro, which will launch in the US in the first half of 2020 at a price of $499.

No information on a UK release or pricing yet, but if you're Stateside, that asking fee buys you a phone with a swappable 4050mAh battery that supports 15W fast charging and has special docks using pogo pins. These should afford users the ability to swap in a fresh battery with a simple pinch. (No need to look up that one person in your group of friends gifted with the knack of taking the backs off phones, then.)

Samsung says it’s working with Verizon to release the phone. It describes its new Galaxy XCover Pro as "a rugged yet stylish device for both field and customer-facing settings... a smartphone designed and engineered for frontline workers".

To that end, it carries an IP68 dust and water-resistance rating, can withstand drops of up to 1.5 metres and it’s MIL-STD 810G certified, meaning it should be able to withstand extreme altitudes, temperatures, humidity, and other tough conditions.

With an EMV Level 1 certification, you might be able to run a business from the Galaxy XCover Pro. The phone has Samsung’s point-of-sale software built in, so customers could pay you with a tap of their NFC-equipped credit card, phone, or watch to the handset. And Samsung says Visa has approved this phone for its Tap to Phone payments pilot programme.

The Samsung Galaxy XCover Pro also has two programmable buttons, which the firm says can be customised for applications like push-to-talk, or, if you’re a Microsoft Teams user, the Microsoft Teams Walkie Talkie feature.

The phone’s specifications are otherwise midrange: a 6.3-inch 2220 x 1080 display (which Samsung claims can still be used when wearing gloves), a 2GHz octa-core processor, 4GB of RAM and 64GB of internal storage (with support for a microSD storage card up to 512GB). It also comes with the latest Android 10 and Samsung’s One UI 2.0.

In terms of cameras, the phone has a 13-megapixel front-facing camera in a corner of the screen and two rear snappers: one 25-megapixel and one 8-megapixel.

When we know more about the worldwide availability of the Samsung Galaxy XCover Pro, we'll update you. Until then, our pick of the best smartphones will doubtless help pass the time...

Read all our Samsung reviews