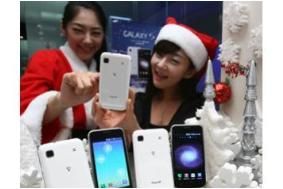 It's still aiming to achieve membership of what's known in Korea as 'Club 150-20', meaning companies making sales of 150tn won and generating 20bn won of operating profit in a year.

While analysts feel the former target is possible, especially with the peak sales period of the last three months of the year just beginning, they suggest it will be hard even for Samsung to achieve the profit target.

But President and CEO Gee-Sung Choi, who has been with the company for the majority of its 41-year life, thinks Samsung Electronics is doing pretty well despite the economic conditions both in the Korean domestic market and overseas.

He told a group of partners in Seoul last weekend that "Samsung did relatively well in spite of the harsh conditions generated by the struggling U.S. and European economies, thanks to help from our partners and differentiated products."

It's thought the mobile phone sector is performing particularly well for the company, with the launch of the Galaxy S likely to be a major contributing factor in the run-up to the Christmas/year-end holidays.

However, LCD TVs may be having a slightly rockier time due to the economic climate and the tumbling prices of sets and display panels caused by oversupply, and weaker than expected demand in crucial markets such as the US, Europe and China.

The company is already planning to strengthen its smartphone presence in one of its toughest markets – Japan, where phone sales are dominated by domestic manufacturers, and the iPhone has been making strong inroads.

Samsung is to team up with Japanese telecoms company NTT DoCoMo to sell both the Galaxy S smartphone and the Galaxy Tab tablet computer.

It's expected that the Japanese smartphone market will expand by 78% in the current financial year, with sales of almost 4m units.