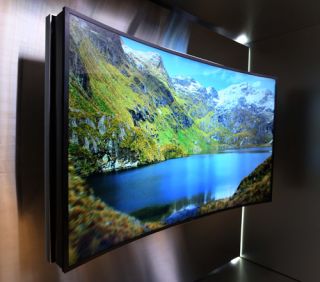 Samsung certainly caught our attention at CES 2014 in Las Vegas as it unveiled the world's first 85in curved TV, but the company was also there to reveal its line-up of new TVs for 2014. Here are all the specs and other details we know so far.

While there was no word from Samsung on whether its bendy TV was destined for production, the company did promise another world first would be coming to the market this year.

Samsung's line-up for 2014 will feature the world's largest Ultra High Definition (UHD) TV at 110in and the world's first and largest Curved UHD TV at 105in among others.

According to Samsung, it has developed an optimal curvature of 4200R to provide the best picture quality from a distance of 3-4m and to create the "ultimate immersive viewing experience".

Samsung's Auto Depth Enhancer technology also features and will automatically adjust contrast for a greater sense of depth and give an almost 3D-like effect without glasses.

Meanwhile, Samsung says that all of its UHD TVs are future-ready thanks to its UHD Evolution Kit – in addition to supporting today's standards such as HEVC, HDMI 2.0 and more.

With its expansive display and curved design, this, says Samsung, is the largest TV ever with a movie theatre aspect ratio of 21:9 to provide a truly cinematic viewing experience in the home.

European launch plans for the 105in curved UHD TV are yet to be confirmed.

The S9 series include the world's largest UHD display at 110in, as well as its 'Frame TV' – the design which Samsung says is a breakthrough concept that moves away from the typical quadrilateral design of large screen TVs.

European launch plans for the 110in model are yet to be confirmed.

These models will not only analyse the signal source and reduce artefacts, but will insert details based on the information from a picture quality database embedded in the TV's system-on-chip.

We'll bring you more information about Samsung's new TV releases for 2014 as and when we get it.