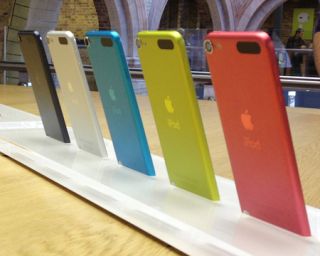 Apple has refreshed its iPod Touch line-up with minimal fanfare, upgrading the entry-level model in line with the rest of the range and dropping prices across the board.

The cheapest iPod Touch – the 16GB model – now comes in a range of colours and sports a 5 megapixel iSight camera, just like its siblings. It will cost £159.

The new 16GB model is on sale in the US but listed as 'currently unavailable' on the UK Apple site. A worldwide rollout is promised "in the coming days".

Apple's iPod range, once the most important product in the portfolio, is now far less popular and siginifcant than the iPhone and iPad.

iPod unit sales decreased by 52% year-on-year in Q1 2014, though the 2013 fiscal year still saw iPods generate a not insignificant $4.4 billion in revenue.

Earlier in the week, rumours suggested September 19th as a possible iPhone 6 release date, with talk of a bigger, 4.8in iPhone to offer an alternative to the 4in screen of the existing iPhone 5S.