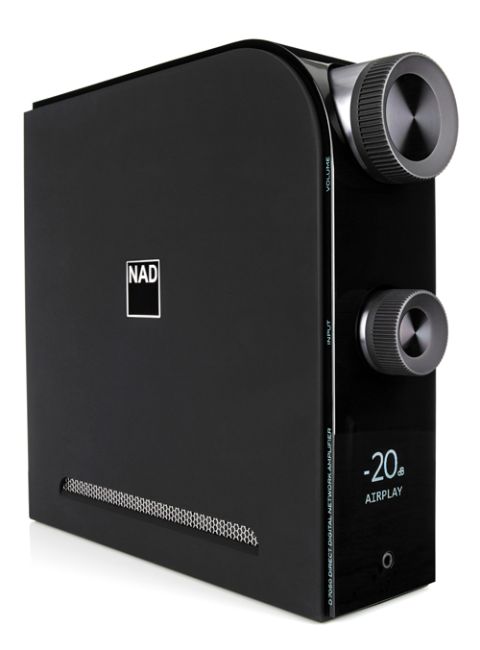 The D 7050 is a clever design, but it’s up against some tough competition, not least its cheaper sibling

The template for NAD’s new D 7050 stereo amplifier writes itself. Take its little brother, the Award-winning NAD D 3020, add power and features, and then charge more money for it. What could be easier?

This new amp looks for all the world like a more grown-up version of its sibling. The casework is around 20 per cent bigger all-round, and looks equally well proportioned.

We think the size is spot-on too. While not as compact as the cheaper model, it remains small enough to fit into all those spaces where traditionally sized stereo amplifiers wouldn’t get a look in.

While we’ve pictured the amplifier standing tall, it’s also designed to sit flat like a conventional alternative too, with that crisp display realigning itself in the correct way automatically. Neat.

Laying flat, the D 7050 will sit quite happily sit on a shelf in a traditional rack either powering a hi-fi system or TV-based stereo set-up.

Make sure you put on the supplied sticky feet, though: apart from stopping the amp from rocking (whether used upright or flat), they allow airflow that will help the amp run cooler.

Sit it upright and it looks right at home next to a computer, where it can be used to power a pair of speakers or drive headphones.

NAD has put a lot of effort into the dedicated headphone amplifier circuitry, and it shows: the D 7050 is an impressive performer in this respect.

Connectivity is almost brilliant. We’re more than happy with the range of digital connections. The D 7050 has USB (type B) to connect to a computer, and improves on its little brother by offering two coaxial inputs rather than just one.

Alongside these you’ll find a pair of opticals and a type-A USB socket that accepts a stream from your iPhone, as well as charge it. Android users can only use this connection for charging purposes.

There’s a choice of wireless connections. If you have an Apple product there’s AirPlay. Simply connect the D 7050 to your network (either wired or wirelessly), and off you go. It’s quick and relatively painless as far as getting things going is concerned.

The alternative option is aptX Bluetooth. This is the input we’re more excited by because it opens up the amplifier for use with just about every phone, tablet and computer out there. You can’t get much more inclusive than that.

Analogue? While the NAD D 3020 has two line-level inputs, the engineers have decided to get rid of them all together for this amplifier. Does that make this amplifier more forward-looking?

We’re not sure, but it does make the NAD less useful, and that’s a shame considering accessibility was one of the main strengths for the smaller one.

We’re not particularly impressed with the build quality either. The D 7050 is broadly built as well as its little brother.

But, what seems good at £400 doesn’t impress as much at double that price, particularly when the larger case shows flex in its panels. The same theme continues with the controls, which are either erratic in operation (such as the touch-sensitive power button on the top), or feel a little downmarket to the touch (the volume and source-selector controls).

The display is nice and clear, although it would have been useful to have some sort of indication as to the resolution of the digital signal being received.

Take a look inside and the D 7050 isn’t just the baby amplifier scaled up. While it too uses a switch-mode power supply and Class-D amplification, the design of the audio circuits is taken from NAD’s top-end models rather than the bought-in solution the junior amp uses.

It works well, with this amplifier delivering sound quality beyond that of its sibling. Regardless of input, it sounds stronger – power output is up from 30W to 50W per channel – and more composed.

There’s also a sense of stability to the presentation than the smaller amplifier doesn’t quite have.

There’s a slight increase in detail resolution. We can hear more layers in a CD rip of Carl Orff's Carmina Burana played back through the USB input. There's marginally greater subtlety too, and an ability to deliver low frequencies with more punch and power.

Stereo imaging isn’t particularly wide, but it is nicely focussed and stable even when things become demanding. The D 7050’s extra muscle really makes itself felt with the large dynamic shifts of this piece where it delivers the sound with greater impact.

Move onto high-resolution material – the USB and optical inputs can cope with 24-bit/96kHz music streams while the coaxial connection can play 24-bit/192kHz material – and the D 7050 responds well.

It has the transparency to show how the high-resolution recording of Kate Bush’s 50 Words for Snow (24-bit/96kHz) improves on the CD version; there’s greater insight and more expressive dynamics, which makes the album all the more enjoyable.

Switching to Bluetooth (using the HTC One’s aptX ability) shows surprisingly good results. Sure, there’s the expected drop-off in performance, but it’s not as big as we feared.

While the XX’s Coexist isn’t conveyed with a full dose of clarity or rhythmic precision, it remains an enjoyable listen, and that’s the point.

Play lower bit-rate files and the D 7050 shows a forgiving way with recordings. It doesn’t tear them apart and exposing every flaw. That can only be a good thing.

But Even this forgiving nature doesn’t work wonders with AirPlay. Its relatively thin and hard-edged sound makes it the least likeable option as far as input sources are concerned.

How does this NAD compare with other £800 amplifiers? It’s not a totally fair comparison, as we can’t think of any other that matches the D 7050’s variety of digital inputs or its neat design.

The closest we can get is something like Arcam’s FMJ A19 or Rega’s Brio-R with a suitable outboard DAC. Against such rivals the NAD is certainly the tidier choice.

It’s easier to accommodate, and that outboard DAC, even if it’s as capable as Arcam’s irDAC, still doesn’t offer Bluetooth or AirPlay capability unless you add even more boxes.

Things swing the other way when it comes to sound. Conventional alternatives will give you greater transparency, rhythmic precision and dynamic subtlety.

Still, we can’t help but applaud NAD for its new range of amplifiers. It’s one of the few specialist brands to take a fresh look at what a stereo amplifier needs to be able to do in a market dominated by phones, tablets and other digital sources.

We’re less taken with the D 7050 than we were with its little brother. Yes it’s better sounding, but not as much as we’d hope for given the doubling of price.

We’re also disappointed by the lack of analogue inputs; that seems unnecessary considering how accommodating the amplifier is in other respects.

The D 7050 remains an amplifier to be admired. Like its smaller brother we think it represents an excellent template as to the features (and possibly even the form) of future hi-fi amplifiers. We hope the rest of the industry pays attention.