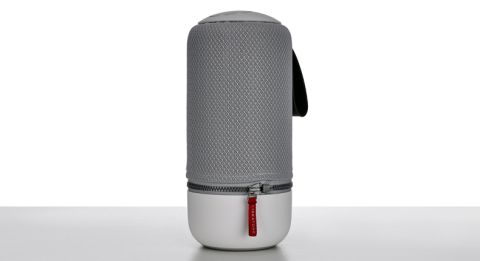 A recommendable wireless and multi-room option

Okay, so that possibly isn’t our most inspired punchline ever, but in case you weren’t tipped off by the literal title, that is essentially what the Zipp Mini is.

It’s a couple of centimetres shorter and slighter than its sibling, which means the drivers it can house are marginally less substantial and less abundant: a 75mm woofer, 25mm soft-dome tweeter and two 90mm low-frequency radiators.

That’s 25mm off the woofer, 12mm from each radiator and one fewer tweeter. There are two, not three, channels through which the integrated Class D amplifier pushes a total of 60W of power.

There’s no compromise on inputs, though: wi-fi, AirPlay, DLNA, Bluetooth aptX, 3.5mm jack, USB, Spotify Connect and Apple Music are all present. You get the same eight-to-ten hours’ battery life and USB out for charging, and, of course, you can zip and unzip the different coloured overcoats.

Then there’s the multi-room aspect, of which Libratone is most proud: an innovative, versatile concept offering up to six speakers freedom of movement via a simple drag-and-drop on the app.

The first thing we notice is how well the Zipp Mini spreads the sound. That’s courtesy of a 360-degree reflector, which acts as smartly with the Zipp Mini as it does in its larger sibling.

We play the title track to Shye Ben Tzur and Jonny Greenwood’s collaboration with the Rajasthan Express, Junun, and for a speaker of its stature, the polyrhythm, bass guitar and meandering horn intro sweep impressively around our test room.

When the group vocal enters, we recognise the same full-bodied warmth in the midrange of the Zipp Mini as with the larger Zipp. As voices become more animated, the Mini is more-than capable of matching their vigour.

That is as true of buoyant tracks such as Junun as it is of the more sombre Ahuvi. Overall, it’s a decent level of insight from a £180 wireless speaker.

The Zipp Mini’s soundstage is not the most immense you’ll find in a wireless speaker of this size, but it organises everything well, with plenty of detail hiding behind that bold and expressive midrange.

It doesn’t struggle with the complex and numerous polyrhythms combining Greenwood’s electronics and Rajasthan Express’s more traditional Indian instrumentation, either in terms of separation or timing, and is quite content with those rhythms changing with only a moment’s notice.

However, there are a couple of caveats. We feel the Zipp Mini is lacking just a little of the kick and drive to match the expressive, rhythmic and smooth performance.

There’s also a marginal lack of space, and while canny organisation stops thicker textures becoming overcrowded, it misses out on detail further back in the mix that some competitors are able to unearth.

If sonic genetics were not something we’d just made up, you could be left in no doubt by those of the Zipp and Zipp Mini that they are family.

Our opening gag may not have been particularly inspired, but it is the most explanatory line of this entire review.

The Zipp Mini’s sound – smooth, full-bodied, rhythmic and expressive – is just like that of its larger sibling, and one without doubt we can fully get behind.

It works equally well as a stand-alone wireless speaker or, thanks to Libratone’s Soundspaces feature, as a facet of a larger multi-room system.