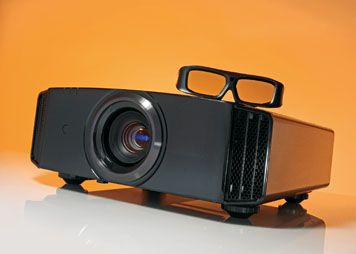 It doesn’t deliver the best 3D images ever, but with everything else it’s pretty terrific

After Sony’s impressive effort last month, it’s the turn of arguably the form player in the projector market, JVC.

First things first. If you want this ‘3D-Ready’ projector to work out of the box, buy it with JVC’s external emitter and active-shutter 3D glasses.

Look past the 3D section, though, and you’ll find everything else you’ll need for big-screen thrills: there are two HDMI inputs, a component connection, an RS-232 socket and that’s pretty much your lot.

It’s an absolute doddle to set up. There are some controls on the chassis, but everything can be set using the intuitive matt-black remote control.

Motorised focus and powered lens-shift mean you can get the picture bang on the money in minutes.

Impressive performance
So, down to business. We’re impressed: it’s hard not to be drawn to any hint of imperfection on an image this large, so it’s handy that there aren’t any. Hours pass, films come and go, and we simply enjoy the picture – the fact it runs quietly helps, too.

Up In The Air shows natural colour palettes can be delivered with an even hand, skin tones have plenty of insight and dark shades and brighter scenes look grand.

Avatar shows that something more exuberant can be given the necessary vitality and punch, with colours boasting the right amount of other-worldliness and looking sharply drawn.

Even fast motion causes no great concern, though our personal preference has the processing off.

3D performance could be better
Now to 3D… It’s certainly one of the easier examples to watch.

That said, it’s not without issue, with fast motion causing some crosstalk and instability.

Despicable Me has its moments, and the 3D effect is subtle for the most part (a good thing), but not for the first time we’re not completely convinced by the 3D experience.

That said, with so few 3D offerings around, this might just be your best bet
if you absolutely must have one now.

Luckily, the DLA-X3 does everything else in predictably fine style. As the entry-level model of three new products, it looks like the company’s 2011 projectors will be the ones to beat yet again…