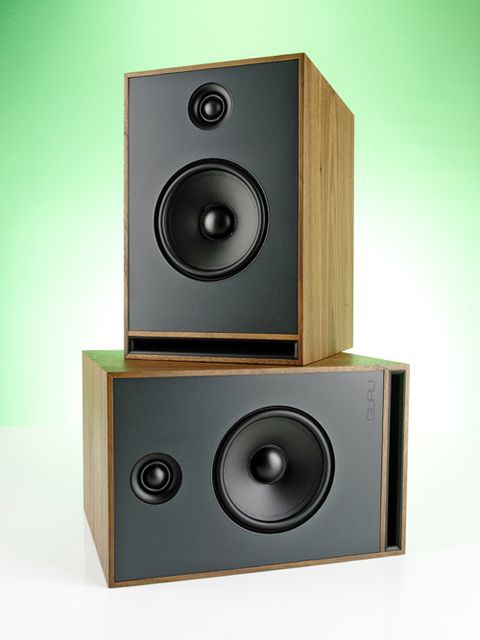 Don’t judge these speakers by their cabinets, because they’re fantastic

It’s very easy to underestimate the Guru Junior speakers. They’re small, they come from a little-known Swedish manufacturer, and their design is entirely mundane.

But turn your nose up at them and you’d be missing out, because these speakers are rather special.

The Guru Junior speakers were designed with the listening environment in mind. Translation: they really like walls. We’d suggest backing them right up against a wall, angled in sharply. This brings out their best, which is quite something.

What immediately stands out is the bass they pump out, which is astonishing considering the size of the cabinet. They’re only 28cm high, and yet the low-end is so deep and hefty it gives even the mighty, multi-award-winning KEF LS50s a run for their money.

And the bass definition amazes just as much as its quantity. Most speakers will sound more solid when backed up against a wall, but at the cost of precision and coherence. Not here: these Gurus put out bass that is tight and detailed, much like the rest of their frequency range.

Further up, you’ll find a clear midrange and crisp top end. Vocals are a touch less prominent than on the KEFs, but there’s not much in it. Overall the Gurus feel tonally balanced.

These speakers time very well. We put on Radiohead’s Reckoner – a test favourite with thrash-percussion at varying tempos – which can sound like a garbled mess on lesser speakers. The Gurus refuse to be wrong-footed.

They’re not quite as agile as some rivals, but they easily make sense of the chaos, laying everything out in a succinct manner. Combine this with an impressive level of clarity and you have a remarkably candid set of speakers.

Stereo imaging is spot-on. Play anything with a big band (any excuse for a bit of Dean Martin) and instruments are precisely located. Conversely, play something sparse like Johnny Cash’s Hurt and his gruff, guttural vocals are locked front and centre.

Perhaps more important than anything else here is the sense of fun at hand. The strong dynamics, excellent detail and upfront demeanour all unite to create a hugely enjoyable and very musical performance.

When it comes to aesthetics, the ingredients seem basic. A 21mm soft-dome tweeter and a 10cm paper mid/bass driver sit above a forward-firing bass slot.

These are set into a stark aluminium face and a straight-walled MDF cabinet, finished in black or white lacquer, or walnut veneer.

The look is inoffensive. On closer inspection the speakers are very well made, so build quality isn’t a concern.

But these Gurus cross the line from minimalist to basic, and a bit of visual panache is needed to set them apart from much more affordable speakers – many of which have greater perceived value.

We really like these speakers. They put out a talented performance that befits larger, pricier designs, and represent great value for money.

Set them up correctly and you’re in for a treat. It’s just a shame their appearance isn’t more attention-grabbing – because these speakers deserve to be heard.