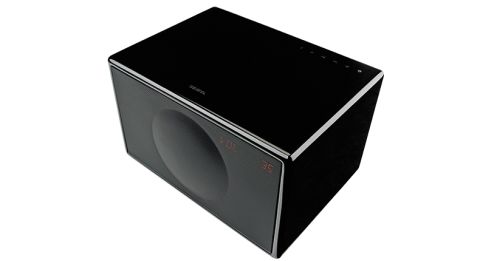 We don’t really expect hi-fi grade audio from a wireless speaker. So when the Geneva Model S Wireless DAB+ does it so effortlessly, we’re completely blown away.

Primarily a Bluetooth speaker, the Geneva Model S Wireless DAB+ also features a clock radio with DAB and FM tuners. It’s a classy looking unit, too, and is competitively priced at £330. You can even put it on a stand.

But it’s the Geneva’s ability to deliver near hi-fi quality sound that’s really won us over.

We stream The Dead Weather’s 60 Feet Tall, and we’re stunned by how subtle and dynamic the Geneva sounds, even via Bluetooth. It’s remarkably clear, and digs out layers of detail with ease.

Alison Mosshart’s rasping, wailing vocals are delivered unflinchingly, and the complex instrument arrangement is tightly controlled. Drums hit with precision and impact, and the guitar plucking sounds taut and sharp – it’s a cohesive, musical performance with an agile sense of rhythm. It sounds fantastic.

There’s a great sense of tension and excitement when listening to Jack White’s compositions, while the mournful violin solo Sur le Fil by Yann Tiersen pulls at your heartstrings.

Most impressive is the Geneva’s ability to convey the silences between notes – it’s full of weight and emotion. And we don’t feel the Model S lacks any bass depth – the lower frequencies dig deep and are punchy and upbeat.

Switch to the 3.5mm auxiliary input and the Geneva retains its balanced and transparent sonic characteristic, although the wired connection does sound meatier and more focused compared with Bluetooth streams.

We have no issues streaming our tunes wirelessly, though, and found that the Model S is largely forgiving of lower-resolution Spotify tracks. We think the talented Geneva deserves to play CD-ripped WAV files more, though.

We don’t see many wireless speakers with a clock radio, but the Geneva Model S’s ace up its sleeve is the alarm clock and FM and DAB tuners. It’s the ideal bedside speaker, and you can set the alarm so that you wake up to the sound of your favourite station.

DAB stations sound cleaner and punchier than on the FM tuner, and we’d advise positioning the speaker where you know you’ll get excellent radio reception.

A word of warning: make sure you always switch the input to FM or DAB before going off to sleep. If the Model S is last left on Bluetooth, the alarm tone changes to a sharp and piercing beeping noise.

Sure it’ll wake you up, but we’d rather start our day with some smooth jazz or heavy metal than face the alarm tone from hell.

The DAB+ in the Geneva speaker’s name hasn’t escaped our attention. Yes, it supports DAB+, but since the service isn’t available in the UK (and there are no plans to provide it in the near future), it’s a redundant feature for us. We’re content with the DAB tuner.

The minimalist design and superb build quality adds to the premium feel of the Model S. Finished in glossy black, red and white, the speaker looks stunning. You can prop the speaker on a metal stand to give it a classy look, while rubber feet are provided if you want to place the speaker on your bedside table.

It’s easier to reach the touch-sensitive controls on top of the unit when the stand isn’t attached.

The touch-sensitive controls glow red in every finish – it looks suitably stylish. There’s also a useful display placed behind the front speaker grille that shows the time, alarm setting and volume level. The time is displayed even after you turn the unit off.

The 3.5mm auxiliary input is hidden away at the back of the panel along with the power input. If we were to grumble about anything, it would be the lack of a USB port for charging our smart device.

Tap the round indent on the Geneva’s top panel to turn it on, and the touch-sensitive controls appear in a neatly arranged grid pattern.

There’s a very quick tone when you tap any of the controls, but it’s subtle enough not to disturb your music-listening.

There are controls to change the volume, select the source (Bluetooth, FM, DAB, or auxiliary input), and manually set the clock and alarm.

The included remote control is a brushed-metal affair with buttons that offer the exact same controls. There are also six preset buttons to access your favourite radio stations. While it’s nice to use, we wish the remote had a bit more heft to it.

And with such superb sound quality for a wireless speaker, it’s hard to see why we’d want to stream in any other way. The Model S is classy in every way, and deserves a place in your home.