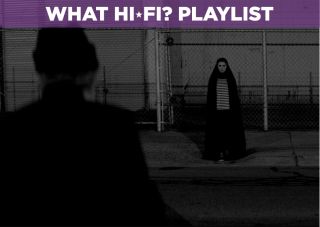 Ever since the skeletal, rat-toothed figure in 1922’s Nosferatu, cinema has had a long love affair with vampire tales.

For decades, cult classics have persistently drawn upon our perceptions of the undead - from gothic, seductive Dracula to sparkly skinned heart-throb Edward Cullen.

Just when we thought the recent vampire movie epidemic had sucked most the genre’s last drops of originality, along comes an Iranian vampire western (unsurprisingly, the first) that’s as fresh and original as its mouthful of a title.

Shot in black and white, A Girl Walks Home Alone At Night is set in Bad City, a sleepy Iranian ghost town populated by pimps, prostitutes and junkies. Think a tamer version of Sin City.

Doing the walking is a lonesome vamp in a veil: a girl who stalks her victims like a shadow, but whose intriguing mystery continues long after her teeth have penetrated the neck of her first on-screen victim.

She crosses paths with cool, dishy lad Arash (ironically, on his way back from a fancy dress party dressed as Dracula) and the two begin an unlikely, yet tender, romance.

AGWHAAN suddenly forgets the brutality of vampirism and matures into a human story of loneliness and acceptance, more Let The Right One In than Fright Night. Arash listens to punk records in The Girl’s dingy apartment above a whirling disco ball; she lets him pierce her ears with a safety pin. It’s all very sweet.

The lack of action and dialogue give this film a languid, dream-like feel, sporadically punctuated by darkly comic moments.

At its best, Ana Lily Amirpour’s directorial debut is moody and surreal; at worst, a little too pretentious and arty. It builds to a satisfyingly bitter-sweet ending but its self-conscious pacing and longheld shots can try your patience.

The noir cinematography is crisp and striking, and all about black detail and high-contrast as faces hide in the shadows and car lights tear through the night. Audibly though, it couldn’t be more colourful. The vivid score – from Iranian pop and techno to frenetic, haunting overtones reminiscent of 1960s Hammer scores – demands swinging dynamics and energy from your system.

A Girl Walks Home might just be one of the most inventive films of the year, but it’s also proof that there's life in the vampire genre yet.