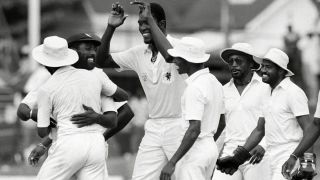 The power of sport to thrill, entertain and enthrall is right up there with music in our book. To follow our recent suggestions for some Netflix home fixtures, here are ten winners from Amazon Prime.

As so often, sport, while the hook to draw the viewer in, isn't the overriding theme of most of these films. These are movies, series and documentaries about the human condition – drama, politics, tragedy and comedy are all here.

The sports fan will embrace them of course, but we're sure there's more than something in these shows for everyone.

All Or Nothing: A Season With The Arizona Cardinals

There are a number of the All Or Nothing series around now, in a variety of sports including rugby, cricket and football – and all of them are excellent.

So we thought we'd go for the first of the American football offerings (but do, please, check out all the rest, especially the New Zealand All Blacks, and Manchester City varieties).

This behind-the-scenes documentary series follows the Arizona Cardinals through the 2015 NFL season, and, as with each series, is a fascinating insight into the ecstatic highs and desperate lows of professional sport.

An inspirational look at what it takes to be a professional sportsman, this documentary, with remarkably frank interviews and behind the scenes footage, shows quite clearly why most of us could never cut it as a pro athlete.

The story of the England rugby team's epic journey to the pinnacle of the world game in 2003.

Jonny Wilkinson, Martin Johnson, Clive Woodward et al explain and explore just what it takes to win a World Cup in one of the toughest games there is. At this level, it's about the small things adding up to give just the slightest advantage. But you've got to get the basics right first.

"I intend to make them grovel."

South Africa-born England cricket captain Tony Greig's words about the touring West Indies cricket team in 1976 couldn't have been more incendiary – and, of course, they would haunt him for the rest of his days.

West Indies captain Clive Lloyd barely needed a team talk after that, and a sporting dynasty was born. In a time when no cricketer wore a helmet, the England team were genuinely in danger for their lives – some of the footage is truly terrifying.

The legendary West Indies team of the 70s and 80s, with its seemingly endless conveyor belt of scarily fast bowlers, would become surely the most dominant force of all time in sport – any sport.

Fire in Babylon is more than a sports documentary; it highlights the importance that this team of disparate men from many Caribbean nations had politically and socially in a time when apartheid was still almost 20 years from ending.

This is an important film, and certainly not just for the sports fan.

From one form of intimidatory ball delivery to another: the fastball is the pitcher's ultimate weapon in baseball. And while, unlike in cricket, the body is not officially a legitimate target, you try telling MLB batters that; intimidation is just as important a factor in America's game as it is in the other bat and ball pastime.

When there's a potentially lethal projectile travelling towards you at 100mph+, you need nerves of steel and world-class hand-eye coordination to cope.

This film, narrated by Kevin Costner, looks at the history, science and psychology of the fastball from the early days of the game through to the present day, and is well worth a watch.

In 2001, American Samoa suffered the worst defeat in international football history – a 31-0 shellacking at the hands of the mighty Australia.

This heartwarming and life-affirming film is the story of a group of people from a speck in the Pacific Ocean, who just want to play the game to the best of their ability and see where it takes them. So they bring in a Dutch coach who had played with George Best and Johan Cruyff and gradually start to improve.

Their targets are small, perhaps, but they are nevertheless not easily attainable. You can expect laughter and tears from this one.

Another fantastic life-affirmer, this one is a Bafta-winning BBC drama. It's the true story of Stoke City's beloved kit-man Neil "Nello" Baldwin – among other things also a registered clown.

Starring Toby Jones as Neil and Gemma Jones as his mother, the film also includes cameos from (among others) Nello himself and the wonderful Lou Macari, the Manchester United legend and Stoke City manager who employed Neil in the first place.

This is a lovely film about an irrepressibly optimistic man who simply will not allow life to get him down. Inspiring.

The story of Joe Calzaghe, Wales boxing legend. Coached by his father, Calzaghe fought his way up the rankings to become a true boxing great, and along the way forged a remarkable relationship with his dad.

With appearances from Chris Eubank and Michael J Fox among others, this is classic behind the scenes fare about one of the toughest sports in which you can participate.

Oh my; what on earth possesses people?

These super-fit, super-committed athletes are each desperate to prove they are the fittest person in the world.

The single-minded dedication required to undertake these challenges has to be seen to be believed. Normal sporting activity, this most certainly is not.

The story of the Dunlop family, two sets of brothers from Northern Ireland, and motorcycle-racing royalty.

Narrated by Liam Neeson, this film is a revealing insight into the high-adrenaline, high-speed, high-danger life of the motorcycle racer. With interviews from many of the great and good of motorsport, including the inimitable (and yet so imitable...) Murray Walker.