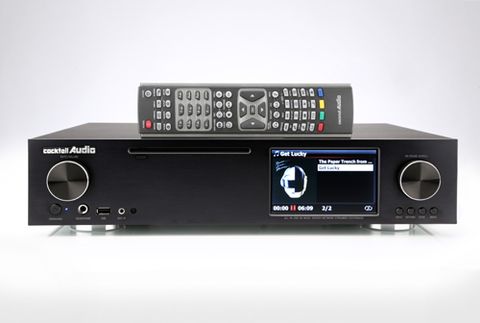 This versatile all-in-one solution has plenty of features to root for, but sound quality isn’t one of them

The Cocktail Audio X30 is a great idea: a high-res streamer, server, CD player and digital amplifier all wrapped up in one box.

It can also stream songs from your smartphone or tablet, play internet and FM radio, and record tunes at the press of a button. Just add speakers.

The first thing you’re going to do with the Cocktail Audio (after turning it on and admiring that bright blue cocktail logo on the display screen) is rip all your CDs.

The X30’s main aim is to store your CD collection in one place, and it does so seamlessly. Ripping a CD is fast and quiet (unlike on the smaller X10), plus you can listen to stored music while ripping.

You can also select individual tracks to rip, instead of the entire CD, rename tracks and create playlists. It's swift and easy to customise each album or track with the bulky but useful remote control at hand.

You’ll also need to be connected to the internet to get all the metadata on a CD, so make sure the X30 is always online.

It’s worth noting that you can’t play the CD itself while ripping it, and you can’t change tracks or start playing a track (if you aren’t already) when in the ripping status screen.

You can’t return to the menus, either, but you can at least change the volume. It’s an irritation, but you can solve the problem by having an album or playlist queued up when ripping CDs in bulk.

Connect the X30 to your home network, via either wired ethernet or the supplied wireless dongle, and the X30 turns into a streaming machine.

If you already have music files stored on a NAS device you’re in luck. The X30 will stream from connected NAS devices (via the Browser folder), as well as from any other DLNA-compatible smartphone or tablet.

It sounds like a wonderfully versatile system (and it is), but it’s tricky to actually get streaming. There’s no dedicated app, so Cocktail Audio suggests a variety of generic third-party apps, none of which worked well enough for us.

It requires much patience and many false starts, and can be a frustrating experience.

We hope Cocktail Audio develops its own app, but in the meantime, we’re sticking with hard-wiring our smart devices to the unit’s 3.5mm input for convenience.

The network connection is also crucial for streaming the X30’s internet radio service, which offers a multitude of stations you can scroll through according to country or genre.

Sound quality takes a predictable dip in quality compared with ripped CD tracks, but it retains the same tonal characteristics.

The Cocktail Audio X30 supports most popular audio formats, from compressed MP3s to high-resolution WAV and FLAC files up to 24-bit/192kHz. Other formats include AAC, Apple Lossless, AIFF, and WMA; DSD support is still pending.

Also, before you start ripping CDs, you can choose the type and quality of file you want them stored as, as well as the bitrate for the MP3s and also a ripping speed.

A rule of thumb, fast ripping speed equals lower-quality resolution. Since the X30 is pretty swift at ripping CDs no matter what the speed set, we’d always aim for the highest quality setting with WAV.

We wouldn’t compress files into MP3s, as not only does the audio quality suffer, but the X30’s storage options are large enough anyway to store hundreds of CDs.

From a 500GB to 2TB hard drive, or up to a 500GB solid-state drive, there’s a huge amount of storage on offer.

One nifty feature of the X30 that’s rarely seen on other streamers or servers is the recording feature.

You can record from internet radio, your smartphone-stored tracks and even from your vinyl records to fully digitise your entire collection.

It records instantly at the press of a button on the remote, and is automatically saved in the Browser menu.

With all its features and options, the Cocktail Audio X30 could easily be the most convoluted and frustrating piece of equipment to operate.

But we were relieved and surprised to find that it is fairly straightforward – after a quick perusal of the manual, of course.

The menus and controls are responsive and easy to navigate, with only minor hiccups such as lag in operation.

We like the large 5in colour interface on the front panel. While it’s not as sophisticated as some, the display is nevertheless easy to read from a distance.

It’s not a particularly high-res screen (800 x 480 pixels) but the writing and artwork are displayed clearly.

The remote control is a big and bulky affair that has a button for nearly every feature of the X30. Instead of fiddling with the control knob and buttons on the front panel, the remote lets you rip CDs or record songs with a single button press.

It may look dated, but it gets the job done.

The X30 houses a 50W per channel amplifier under its sturdy metal chassis, with a decent spread of digital and analogue connections.

The coaxial and digital connections (input and output) all support files up to 24-bit/192kHz, as does the AES/EBU output.

A pair of line-level outputs is available if you want to connect an existing amplifier to the streamer, while three USB ports (two at the back, one in front) are there for playing high-resolution files or for attaching the included wireless dongle.

Speaker terminals, line-level inputs, an FM radio tuner (the antenna is included), and an ethernet port can also be found on the back panel.

On the front panel, there’s a 3.5mm input for hard-wiring your smart device, and a 6.3mm headphone port.

Now that all the features are dealt with, it’s time to tackle the Cocktail Audio X30’s most crucial function: sound.

And this is where its major flaw is exposed because, despite all its fancy features, the X30 isn’t really that interesting a listen.

There’s nothing unpleasant about the sound by any means – a decent amount of detail, punch and the ability to go loud is all on the cards here.

But there’s no real engagement beyond the surface detail; the X30 doesn’t seem able to dig out the subtleties of a song, and is content to deliver a superficial summary.

There’s impact and decent clarity, but the dynamics aren’t fluid, and the overall sound is rather one-dimensional.

The Dead Weather’s intricately arranged 60 Feet Tall sounds flat and emotionless, with no build-up of tension in this brooding song. The X30 doesn’t time particularly well, either.

Eminem’s The Way I Am has a good amount of bite and attack, but we’d like a touch more precision and agility to get the full impact of that punchy rhythm.

High-res files have a touch more detail and openness to them. You can hear the rough edges of Lorde’s vocals on Royals (on a 24-bit/48kHz file), but there’s still a lack of dynamic subtlety to the track.

You’ll also need to turn up the volume quite high to get any real sense of punch and excitement.

If this review were based on the X30’s features set alone, then it would get a solid four stars.

Despite some operational hiccups, the sheer versatility of the X30 is impressive and clearly its biggest attraction.

Nothing else we’ve reviewed so far has come close to the combination of amp, streamer and server here offered by Cocktail Audio.

We’d be worried, though, about recommending this as your sole music system, as it simply doesn’t sound good enough. You’d be buying the X30 for its features, not for its sound quality

And for £1000, we could easily point you in the direction of far more exciting, involving and interesting hi-fi set ups.