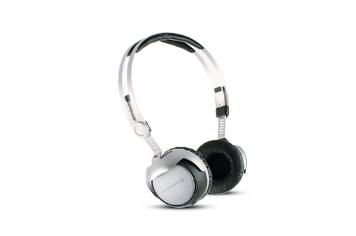 Best portable on-ears £200+, Awards 2012. As suited to home use as they are to commuting, the T50ps are superb all-rounders

We started a gargantuan collection of headphone reviews, in the September 2011 issue, with the Beyerdynamic T50 p, one of our favourite pairs of headphones in the entire test.

Arriving with minimal fanfare right at the tail-end of 2010 these premium cans caused an instant stir. The company has used a couple of different alloys to come up with a design that’s thin but solid, and functional but elegant.

They’re comfy, too – the leatherette earpads are kept snugly in place by the grippy band, but at 174g they’re light enough to be ignored.

And thanks to a closed-back design that leaks almost no noise, they’re perfect for commuting.

The sound they produce, on the other hand, is entirely unignorable. Start with Bon Iver’s brilliantly haunting Perth and the T 50 ps prove to be incredibly insightful, finding nuance in all of the many vocal strands.

They’re superbly punchy and precise, too, hammering out the thumping drums as the track builds, and throwing out the intentionally cacophonous crescendo with serious, dramatic force.

Seamless integration
There’s real weight and depth to the bass, but it’s integrated seamlessly with the midrange, which in itself is convincingly solid and full-bodied.

At the top-end the treble is twinkly but controlled, with cymbals sounding detailed and striking without ever sounding bright or harsh.

This ability to combine punch and attack with control and fluidity means they won’t overly expose the more compressed tracks in your digital library, but you’d be doing these excellent headphones a disservice if you didn’t switch to a lossless or uncompressed format – once you do, you’ll likely never switch back.

Our only wish is that there was a mic and control unit, given the £240 price and the inexorable rise of the mobile phone as a music device, but otherwise we have no complaints – these are seriously superb.