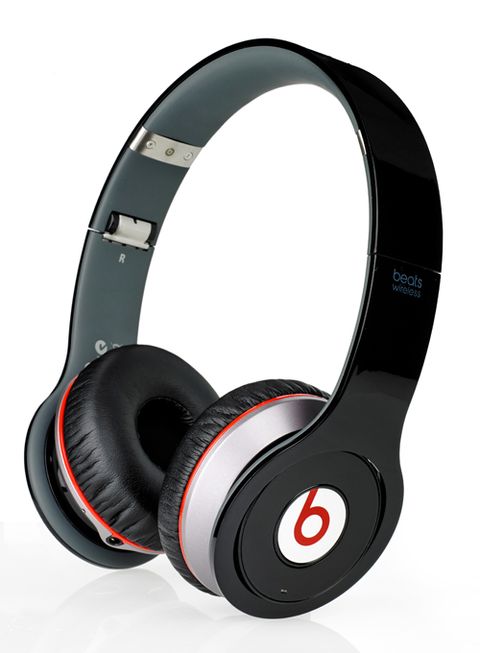 Heaps of bass and style, but not much else - a hefty price tag for a one-trick, but trendy, pony

If you’ve come across Beats headphones before – and it’s likely that you will have – you can probably picture what they look like.

Rub out the wires in your mind-painting and you have the Bluetooth-toting Beats Wireless.

These ’phones support SBC, aptX and AAC varieties of the wireless tech, so are compatible with a wide range of devices.

Portability is key for wireless cans, so the signature Beats design makes sense considering it’s a compact one.

The Wireless headphones come in six colours – red, white, black, grey, red and blue – and the finish is of a high standard. They feel reasonably sturdy, so accidentally drop them and its likely they wont break (the first few times anyway).

It’s the creaky noise of the plastic when they’re handled and the clicky sound when extending the band that let the otherwise solid side down.

Battery life is a generous 10 hours from only a one-hour charge, so they should keep you going during the long-haul.

We test a black pair and check our reflection in the headband’s plastic glossy finish – the polish cloth provided comes in handy for its finger-marky proneness.

Also included in the box is a USB charger cable, a 3.5mm audio cable for a traditional wired connection, a Beats decal, and a smart oval-shaped carry case.

Push the headband in slightly and the ear pads collapse inwards to fit in the case.

It’s when we put them on that we hit our first hurdle. We felt the band’s rubber lining could be more cushioned, and while the soft leather pads are comfortable, they don’t feel secure enough.

Hardly any room noise is blocked out, and the slightest movement can cause the plastic earcups to creak.

Adjust either during playback and you can clearly hear the click mechanism, which is distracting.

The multifunction key does most of the work, turning the headset on and pairing it with your device (hold it down for two seconds to do that), as well as initiating hands-free calling (click once to answer or end calls, and twice to activate voice dialing).

Navigating the controls while you’re wearing the Beats takes practice, but means most things are convenient one-click operations.

The audio cable has a built-in remote, but the controls are only compatible with Apple devices.

Beats has never hidden its attitude where sound is concerned: bass is power, power is music.

True to its formula, the bass pounds with mighty punch and attack. The Beats Wireless thumped their way through Ying Yang Twins’ Dangerous with exuberance, but at the expense of the vocal part.

Unfortunately, if it’s not a ‘beat’, they seem incapable of drawing out sounds with as much enthusiasm.

But even the bassy elements can feel unnatural; the Beats’ caffeinated approach adds an artificial energy to Alt-J’s Breezeblocks, which often feels more brash than fluid.

We much prefer the rival Philips M1BTs’ bass grip and balanced dynamics to the outright power of the Beats.

The sound lacks detail and articulation higher up in the frequency range too, feeling flat and lifeless with anything other than pop or dance music.

Like the Beats by Dr Dre Executives, the treble was significantly harsh and brittle, especially in the higher volumes, and struggled to deliver any smoothness in Florence and the Machine’s strident vocals.

Not one we can wholeheartedly recommend, then. If you like massive bass and don’t want cables then sure, go for it.

But look elsewhere and you can find better, subtler and more musical performances for your money.