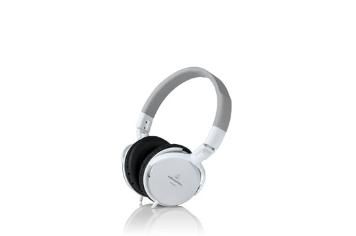 We make no apologies for dwelling a little on the looks of these headphones.

We can't, then, help but feel that the Audio-Technica ATH-ES7s, with their mirrored ear-cups and ice-white mark-one-iPod 'n' mid-Eighties-grey headband, might struggle to find the size of audience their performance deserves.(Though we should point out tthat a more straightlaced, black finish is also available.)

Decently lightweight and comfortable (up to a point – that hard grey headband isn't the most ergonomically shaped), the ES7s feature large ear-cups and transmit next-to-no cable noise. What they do transmit, in spades, is a balanced, expansive and convincing sound.

Excellent bass performance
Neutral Milk Hotel's In the Aeroplane Over the Sea offers a considerable test of cohesion, midrange response and bottom-end tonality, and it's a test the ES7 pass at a canter.

They're richly informative with vocalists and offer excellent bass – the difference between bowed, blown or computer-generated low-end is explicit.

No frequency is given undue prominence, and the ES7s remain balanced even at dangerous volume levels. These don't cause fatigue after long sessions, either.

Actually, that's only partly true: they can make your ears a bit hot after an hour or so, which is a fair bit quicker than some of the others in the shops. But in terms of sound, they're as cool as the proverbial cucumber.