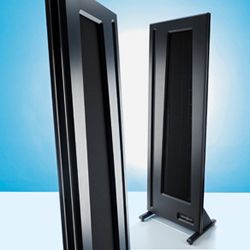 Provided your tastes coincide with the Omega's strengths, you're in for a treat. If you they don't, you'll wonder what all the fuss is about

Never heard of Analysis Audio? Neither had we until we walked into the company’s demo room at the last Bristol Sound & Vision Show.

Expos are difficult places to judge performance, but what we heard was enough to make us find a pair of Omegas for review, and we’re glad we did.

With everything optimised – down to the partnering system, position and the right kind of recording – these speakers are capable of magic. It’s the kind of sound that escapes the usual mechanics inherent in hi-fi and offers clear and unambiguous access to the music.

As you can see, these are no ordinary speakers. They are a two-way design combining a long ribbon tweeter with a planar bass driver.

The two cross over at just 600Hz, which means the tweeter handles much of the band where vocals are covered – it’s the area where people’s hearing is particularly sensitive.

Position with care
The two drivers sit in an open baffle with no enclosure, so they fire similar amounts of sound backwards and forwards. However, this means a great deal of care is needed when it comes to positioning.

Tweeters on the inside edge and well away from all walls is a good start, and in our listening room a fair bit of toe-in helped to focus the stereo image. Get it right, which takes time, and you’ll end up with an impressive sound of pleasing proportions.

Despite a claimed sensitivity of 86dB/W/m, these speakers like to be driven by a muscular amplifier. Our Bryston power amp delivers 300W per channel and worked well, but weedier units might prove disappointing due to their inability to drive the speakers properly. The result would be a rather lifeless and underwhelming sound.

With the Bryston, the Omegas shine. They deliver a wonderfully articulate sound that combines detail, fluidity and transparency better than just about anything we’ve heard– all without any hint of harshness or aggression.

Large-scale sound
The speakers’ unusial dispersion gives a large-scale sound that swells to fill the speaker end of the listening room in a manner that makes conventional drive-unit-in-a-box alternatives – even large floorstanders such as Tannoy’s DC10Ts – sound small and undernourished by comparison.

That planar driver delivers plenty of bass, too. Fed with the thud-fest that is Basement Jaxx’s Kish Kash, it delivers deep lows with assurance and texture.

But this isn’t the kind of bass that thumps you in the chest; It’s more like a wave that washes over you. It takes a while to get used to such a presentation, but do that and it’s really appealing.

We think Analysis has done a great job of integrating the two drivers, and displayed some real skill in designing the crossover. The result is a seamless sound, and a consistency of delivery throughout that’s hard to better.

Compromised in some areas
As good as these speakers are, there are areas open for criticism. No matter what we tried, we couldn’t get around an obviously skewed tonal balance that drops off at high frequencies – it makes the Omegas sound softer and more closed-in than they should.

This effect, coupled with a lack of attack, also robs it of the bite necessary with aggressive music such as Eminem’s Recovery, or Stravinsky’s The Rite of Spring.

With certain music, Allison Krauss and Unison Station’s Paper Airplane, for example, the Omegas are spellbinding. What you make of them will depend to a large extent on what kind of music you listen to. They’re a skewed performer, with obvious compromises that suit certain genres better than others.

“Compromised” is hardly a word anyone would expect to read in a review of a product costing £14,500, but that’s exactly what the Omegas are.

If you love unforced fluidity and the ability to dig up lots of detail without a clinical sound, you’ll fall in love. At their best, they make even the finest conventional speakers sound ordinary and mechanical. Compromise or not, that makes these rather special.