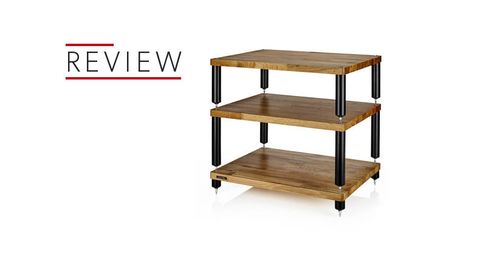 Want to give your system adequate support for a decent price? Atacama has you covered with the Apollo Storm 6

It seems peculiar to give a product so reliant upon its stability a moniker that sounds more like a war video game franchise – somewhat akin to naming a housing association ‘Frostbite’, or an airline ‘Turbulence’.

But we are usually so enamoured by Atacama’s hi-fi racks, this one could be called pretty much anything and we’d still be excited to have it in our testing rooms.

The Apollo Storm 6 is a more affordable version of Atacama’s Award-winning Evoque 60-40 Special Edition: a modular support that blurs the lines between class-leading hi-fi component and typical household furniture.

The Apollo Storm 6 is built from 27mm blocks of warp-resistant, solid British oak, instead of the Evoque 60-40 SE’s bamboo, but they share the same impeccable build quality and choice of four leg lengths – 135mm, 185mm, 235mm and a 60mm option used in the base module.

Atacama hasn’t quite gone to the same levels as it did with the Evoque 60-40 SE rack. For example, the nuts on which the leg spikes of the above module sit are visibly smaller and look more like a typical screw head.

However, it’s not a case of the Apollo Storm 6 having a sloppier construction, rather that it uses less expensive components to save the customer money.

And it’s quite a bit of money, too. Given that reliable support is necessary to get the best performance from your system, and that most people would be in the market for three or four modules, £50 less on each (£130 per module) is a significant saving.

But that shouldn’t mean a significant drop in the support and isolation it offers your system.

The performance of our reference system, using an Award-winning Clearaudio Concept turntable as our source, is bettered in every respect when using the Evoque rather than the Apollo Storm.

However, considering the price difference, we can’t complain too much.

The Apollo Storm 6 still lets the Clearaudio’s innate talents shine, delivering a taut, dynamic performance that far exceeds that you’d get from resting it upon your typical living-room furniture.

It keeps the whole frequency band in check, too, offering up low end as far as the Concept can reach without letting the timing or detail suffer.

Though it may be tempting to swerve this particular expense when budgeting for your system, a rack doesn’t have to be the most expensive component.

Atacama has consistently shown that not all supports are created equally – especially when it comes to housing your hi-fi.

That the company has created another class-leading support with a hefty saving on its Award-winning sibling is reason enough for celebration.

See all our Atacama reviews