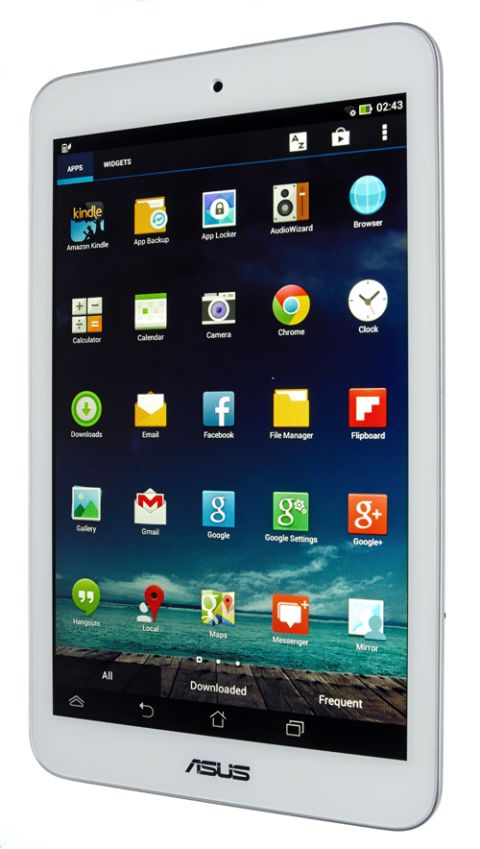 As the brand behind the excellent Google Nexus 7, we had high hopes for the larger MeMo Pad 8 – could we have all the brilliance of the Nexus with a larger 8in screen?

Unfortunately, in this case at least, the answer is no.

The MeMo does its best to look the part – it’s available in black, white and pink, with our white version coming in a glossy plastic casing. It’s not the most premium finish, but it feels sturdy enough.

Its measly 1GB of RAM puts it more on a par with the more budget tablet set, though, such as the Tesco Hudl and Archos 80b Platinum. That’s a rather strange choice when it costs a Nexus 7-matching £200.

For the most part, you won’t see the MeMo Pad 8 hesitate when swiping between menus and opening apps. We tried it against its Google-badged sibling and it largely kept up as we nipped in and out of apps in an attempt to catch it out.

Re-orientating the screen between landscape and portrait could be quicker, though, and graphics-heavy games can push its limits too.

However, one of the most disappointing things about the Asus is its video performance. The 720p display is sharp enough for things like icons and text, but has some way to go before it’ll touch the Nexus 7 in terms of outright detail and clarity. We’d like it to be brighter too.

But it’s the MeMo Pad 8’s way with colour and motion that proves the biggest let-down. The whole colour palette feels off – whites are murky and we saw a slight green cast to the picture.

Blacks will go deep, but detail becomes non-existent when they do. As for motion, even the slowest of landscape pans can be affected by a rather distracting jerkiness.

It’s worth noting that we saw a slight improvement in white performance and contrast upon turning off the power-saver feature. While this does a good job of conserving the battery, it does hold back the MeMo Pad’s performance.

Cameras on tablets aren’t usually up to much in terms of quality, and the Asus MeMo Pad 8 is no different. The main 5-megapixel unit delivers mixed results, with a tendency to over-expose whites when you use tap-to-focus, or produce dulled, noisy shots when you don’t.

As ever, give it some bright natural light and results are better, but edges still appear on the soft side and there’s a lack of fine detail and depth.

Musically, the MeMo Pad 8 has a similar tone to the Archos 80b Platinum. It’s well-balanced and relatively rhythmic, but is rather unsubtle dynamically and lacks the level of detail and texture that better tablets offer.

It works best in portrait for listening out loud – the internal speaker sits along the bottom edge – but with a considered grip, you can make sure you’re not covering it in landscape too.

Music sounds tinny and a little on the harsh side, but dialogue in movie clips fares better. Headphones offer far more clarity and balance than the internal speaker.

There’s no hiding our disappointment with the MeMo Pad 8. We expected better from a brand that’s proven itself in the tablet market. And with a price that matches that of the Google Nexus 7, it makes for a hard recommendation.

Of course, it does have the extra screen acreage, and if you’re settled on an 8in screen this is one of the cheapest. But with tablets like the LG G Pad also fighting for your money (albeit a little more of it), it’s really up against it to prove its worth.