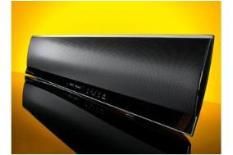 The YSP-4100 is a sophisticated, modern and convincing attempt to produce surround sound from one box

Not all home cinema enthusiasts have the space or permission for a full surround sound speaker system. That's why products such this soundbar exist.

Yamaha's Digital Sound Projectors attempt to create a surround sound effect by firing beams of sound off walls, so they reach you from different angles.

The '4100 has four HDMI inputs, a set of component inputs and assignable digital audio inputs. There's no built-in upscaling, but the Yamaha will upconvert any analogue video signal to HDMI.

The key feature of the new model is the ability to decode high-definition audio formats so you can enjoy the higher bitrates that these formats offer.

Set-up couldn't be simpler thanks to the IntelliBeam automatic calibration system. Optimum beam angles, levels and frequency response are all measured and the whole process takes a matter of seconds.

You can listen in a variety of modes including stereo, 5.1 and seven-channel surround sound.

For the money, the '4100 is an extremely impressive piece of kit. You get a fantastic spread of effects across the front of the sound field. Sound is detailed and effects move between channels accurately and with great purpose.

The Yamaha also fires those effects far and wide – arguably this is its most successful attempt at trying to place the viewer at the epicentre of the action.

It has a richer, more rounded sound than previous models: this helps prevent the unit from sounding hard and uncomfortable in rooms with minimal decor.

The YSP-4100 creates just enough bass weight to fill small to medium-sized rooms. If you have a need for more clout, you can connect a subwoofer – and usefully, a £150 wireless transmission kit, the SWK-W10, is available too.

Yamaha has obviously put a lot of thought into designing its latest Sound Projector: it offers a great mix of performance, features and usability.